I’m going to be honest with you here. I’m still fairly new to comics, and even more fairly new to the Amazing Spider-Man series. I started reading back at #688, the first part of the No Turning Back story arc. It was the perfect dropping in point of the series and I’m ecstatic that I did. Marvel is going all in with the 50th anniversary of Spidey, bringing us “point 1″ issues from the other Spider-Man series in the month of August. But they haven’t pulled any punches with the four part No Turning Back story.

If you ask me, Dan Slott is the perfect writer from ASM. He writes a compelling Spidey, but also writes compelling enemies. The story has been as much, if not more, about Curt Connors, AKA the Lizard than about Parker. With so much focus on the struggle of a newly “cured” Connors and his struggle with his animal side to regain his humanity. But that’s not to say that Pete’s spotlight has been stolen. He’s got his own struggles, some of which are dependent of story prior to #688, but not so much that we can’t follow.

I was so intrigued by Spider-Man’s own struggle within the story. His struggle with where he stands on killing an enemy, or sacrificing a friend. Is killing one to save a hundred justifiable? It’s so refreshing to see that Peter is still finding his identity as Spidey. I love the narrative of Parker’s, he’s constantly turning situations over in his head, fighting with himself, weighing the odds. He’s such a smart, witty and relative character, and #691 makes it incredibly obvious that he’s still developing and still a compelling character for already invested readers and newcomers alike. 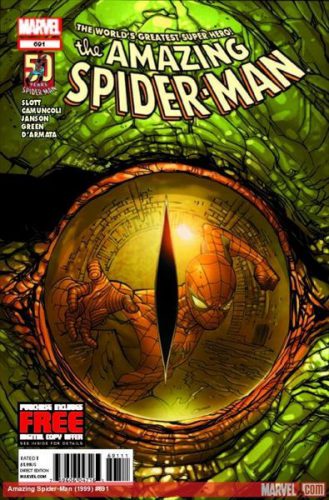 But, I’m still hooked on the development of the Lizard’s character. With Connors being turned back into a human in #689, we finally get down to the end of his struggle, where he changes back into his reptilian form. It was really exciting to see him take on a new look, it shows Liz is back, but he’s also a different enemy than we know. But beyond all of that, Slott shows us that Connors is still shining though the Lizard’s darkness. My heart sank when the battle between Spidey and the Lizard came to a close and we finally realized the true nature of the Lizard’s identity.

The art by Guiseppe Camuncoli, Mario Del Pennino, inks by Klaus Janson and Daniel Green, and colors by Frank D’Armata is exceptional, but in some panels shows a bit of a rushed feeling. I believe it also shows how having so many people working on a comic can show through in variances. Although every character is distinguishable there are panels where their faces really do not look the same as other. Some of the fight sequences seem a bit rushed as well, lacking a bit of the polish we see in the rest of the comic. The art is mostly very well done, but it does show inconsistency.I’m not saying the art was bad, because it really is exceptional. All I am pointing out is that it has inconsistencies.

Lastly, I’ll draw this review to a close with a mention to the end of the book. Yes, I thought the issue was over when the struggle was finally concluded. But the beautiful part of story is that it automatically invests you in the next issue. We got to see a snippet of Kingpin and Hobgoblin in #690, but now we got to peer a bit further into their involvement in the story. The end of the comic leaves us with the appearance of an old “friend” that should make for a very interesting #692.

The Dollar Box: Face-To-Face With … The Lizard! Welcome to The Dollar Box, where I look at classic single-issue stories and short runs of comics with a cover…