In America’s Got Powers, we see what happens when an entire generation of super-powered teens is made to compete in what essentially amounts to a game show in order to be on the only super team there is, Power Generation. The super-powered teens slug it out on national television, risking injury and even death, all for the enjoyment of the audience. We follow Tommy, the one and only “Zero”, a child with no powers, as he is thrust into the spotlight.

The story starts off with a flashback to six months ago, after the death of Tommy’s brother in the previous season of America’s Got Powers. We find out that Tommy’s brother’s body wasn’t actually buried, but taken away for research. We’re treated to another flashback to the days before the boys were put into the compound and put on the show, and see a little more of the brothers’ relationship. Now back to the present, Tommy is taken away from his quarters after his recent surprise showing, and we see a little romance for Tommy, and find out he’s an objector to using his powers and fighting. After Tommy’s mother takes a trip with Professor Syell to “The Infirmary” we find out that maybe Tommy’s powers are even more special than we thought, and his brother’s fate may not have been so grim. 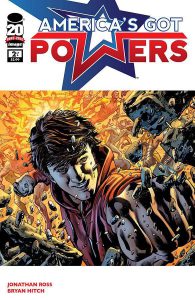 Jonathan Ross and Bryan Hitch team up to bring another great issue of their mini-series to the reader. Though, it was a little slower with less “action” than the last issue, in my opinion, it still had plenty to keep the reader entertained and engrossed in the story. Several revelations were made and plenty of background was given to us that we were unaware of before.

One thing I particularly like about the story as a whole is the power rating of each super-powered teen. It’s interesting to think that their abilities can be quantified in such a way, and the fact that Tommy is a Zero – the only zero – is something to think about considering his newfound abilities.

Ross does well as a writer, making the super-powered characters seem normal and relatable. They struggle to understand who they are and where they fit into the world, just as people do on a daily basis. Tommy, being the “Zero”, may just be the most “normal” of them all, even with his recent display of something different. Ross makes the characters compelling and conveys the relationships between them well. Tommy’s romance with Debbie helps to make the character just a little more likable in my eyes, and though a little expected, it’s a nice touch.

Hitch is a monster on the art. He absolutely kills it. All in a good way, of course. As content as I would be for Hitch to draw The Ultimates for the rest of his life, I’m so glad he is working on America’s Got Powers. Few artists could do it quite as well as him, and his art is the only I can imagine the story with now. His style, being so cinematic – for lack of a better word – adds a lot to the story.

Overall, a great second issue in what is shaping up to be a phenomenal mini-series. Definitely something to look forward to for the next few months. Ross and Hitch continue to deliver.

Advance Review: America’s Got Powers #1 America's Got Powers seems like a comic that was born of the question, "What would it look like if we…

Twice as much as Marvel for a dollar less Official press release Okay, that’s a bold statement and possibly contentious enough to get you to read this but it’s…

Review: Chew #26 Tony Chu is a cop. A cop with a weird power. He's cibopathic, which means that when he eats something,…