As Marvel continues to roll out the Marvel NOW! books for weeks to come, we’re getting some pretty cool new books. One I was very excited for was Avengers Arena. I was a pretty big fan of Avengers Academy before it ended, so I was excited to see some of my favorites from the series, like Hazmat and Mettle, make a return in this new book. This week marked the first issue, and I was pretty thrilled to see if Dennis Hopeless could deliver on the writing.

The book opens on Day 29 with Hazmat being hunted by X-23 and Hazmat thinking that some things could be worse than death; that being gutted by x-23 might not be so bad. Cut to Day 1 at the academy, and Hazmat and Mettle are taken from a tender moment and transported to a strange world, along with fourteen other young heroes. Arcade comes rising out of a volcano, explaining that after reading a couple of children’s books (The Hunger Games, I’m betting), he got this great idea to not build death traps 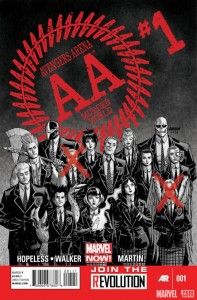 , but to make the heroes fight one another. After a tussle, in which Arcade shows that he is a god in this world, and a rather unexpected occurrence, Arcade gives the heroes a rather memorable introduction to Murderworld.

Man, I was pumped for this issue, and Dennis Hopeless delivered. I was a bit worried at first, since he isn’t one of the “big name” writers that Marvel usually trots out, but his writing was spot on. The relationship between Mettle and Hazmat felt genuine, the feelings of confusion and hesitation that the heroes experienced upon arrival in Murderworld were believable, and Arcade was wonderfully maniacal. I really see this series being a great run full of emotion, a bit of humor, and some pretty awesome action, if this initial issue is any indication.

Kev Walker, the artist, made this issue a pleasure to look at. All the characters are immediately recognizable, so that’s a plus, but they’re also very expressive, which is a must for me. I mean, honestly, I would buy a book of Kev Walker just drawing people’s facial expressions. That’s how much I liked some of these. Arcade was especially expressive, which was great since he’s a weird, crazy, evil guy.

I was psyched for Avengers Arena, and I was not let down. It could just be the attachment I have to a few of the characters, or could just be that it’s a good comic (I think it’s both), but either way you should check it out.