Well, here it is, the opening salvo of the big event of the Marvel summer: Avengers vs. X-Men. The Phoenix Force is returning and it’s going to lead to a showdown between the X-Men and the Avengers. This is just a preview issue but it highlights two characters that will play important roles in the upcoming story, Scarlet Witch and Hope Summers. Brian Michael Bendis handled writing duties for the Scarlet Witch story and Jason Aaron wrote the Hope story.

MODOK is attacking an A.I.M. deserter when the Scarlet Witch shows up to stop him. She is holding her own until some of MODOK’s minions overpower her, but Spider-Woman and Ms. Marvel show up to help out. The women quickly defeat MODOK and A.I.M. and they invite Wanda back to Avenger’s mansion. But, before she can even make it through the door, Vision confronts her about what she had done to him. He tells her that she no longer belongs at the mansion and she departs in tears. 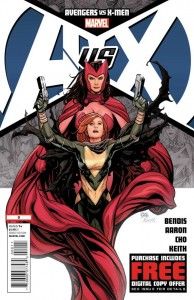 Cut to Utopia with Cyclops catching Hope sneaking off the island, using his personal jetpack no less. They exchange words about Hope’s extra-curricular activities and about the Phoenix. At that moment Hope hears a call on her police scanner and attempts to leave, but Cyclops tries to stop her. She uses his own optic blasts on him and takes off. She catches the Serpent Society trying to break into a vault and proceeds to lay waste to them taking them all out before Cyclops and Emma Frost arrive.

These were two really good stories that help set up the major event that’s about to kick off. Bendis’ story about Wanda brings some resolution to her actions with the rest of the Avengers and how she feels and deals with all that. And Aaron’s story involving Hope foreshadows how she is going to change in the coming months, plus how she’s a pretty bad girl taking down the Serpent Society by herself.

Frank Cho’s art is wonderful. I especially liked how he drew MODOK, who actually looks like a credible threat and not so much just a huge head in a chair. His take on Cyclops is another great aspect of the pencils in this book, and Wanda just looks downright fantastic.

All in all, this is a pretty good kick start to the Avengers vs. X-Men crossover. I’m anxiously awaiting picking up AvX #1, especially if the writing and art stay consistent throughout. This has all the makings of an interesting and highly enjoyable tale.

Don’t forget to pickup Avengers vs. X-Men #1 TODAY at your local comic store.

Marvel announces huge event for 2012! This is going to make waves. To be written by the so-called Marvel architects -  Brian Michael Bendis, Jason Aaron,…

Marvel…NOW? So by now I'm sure you have heard all about the Marvel NOW! news. For those of you who haven't…

Comics For Noobs: December 20th The year 2012 has been a fantastic year for old comic fans and new alike. The Avengers movie hit huge…