I am going to start by saying that I have not read any of the New 52 Bat-titles, despite hearing a lot of good things. When the New 52 was launched I stuck to my wheelhouse of comics, Green Lantern and Justice League. Looking back, I should have picked up Batman. Despite it being expensive to pick up a first print of issue #1 (and being a completist, I would have to have one in my collection), the high praise it has received makes me want to pick up the run so far, but I decided to start at issue #13 since the return of a certain Bat-villain would be in the pages.

The Joker is back, with a bloody vengeance. That’s all that really needs to be said, but indulge me while I delve into the plot a little more. The Joker brilliantly manages to disable the GCPD’s lights and steals back his face, killing several officers in the process (see what I mean by bloody?). Batman deduces that the Joker is reenacting the first time he killed someone and brought the attention of Batman. 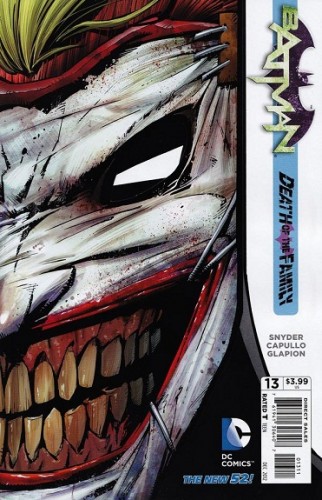 Batman confronts who he believes to be the Joker, in his old Red Hood getup, at the same factory where it all started. But, it turns out to be Harley Quinn in disguise and at the last second Bats is hit by a giant mallet into a vat that is slowly filling with acid. Then cut to the Joker confronting Alfred with a hammer.

Admittedly I haven’t read any Bat-books in a long time, but Scott Snyder is definitely drawing me in.The dialogue for the Joker while he is taking down the cops in the police station is classic and you can just feel the fear Jim Gordon has when he realizes who it is. The backup story with the Joker and Harley Quinn just proves how wonderfully sadistic the Joker is. Convincing Harley to let him cut off her face, to be more like him, only to put the Red Hood mask over her head is just insane and is totally him.

I didn’t think it was possible, but the Joker looks even creepier thanks to Greg Capullo’s pencils. Joker’s face being held on his face by a belt is just… disturbing. I’ve said it before and I’ll say it again, facial expressions are a huge selling point for me, and when Gordon realizes who it is, the sheer terror on his face is something to behold. When the officers are dying from the Joker toxin, the pain on their faces is palpable, and of course the frowns look great. One thing I like about Capullo’s art, is it looks very fluid.

Some people will say that Batman will always sell because of who the character is, but Scott Snyder and Greg Capullo are the main reasons why Batman has been one of the highest selling books since the relaunch. When you have talented writers and artists working together, you have magic. When you have them working on a character like Batman, the sky is the limit. Consider me on the Bat-train from here on out. (Now if only I could find a first print of issue #1 without giving up my arm.)

Art: 9/10
Script: 9/10
Parental concern: Some blood and violence, nothing serious.

Should Villains Be Killed? It's a moral quandary heroes wrestle with. Is killing a villain right if it is to save lives? Some heroes…