The finale to Court of the Owls is finally here! Scott Snyder and Greg Capullo have toughed it out, written and drawn one helluva story, and now bring us to the conclusion. What’s going to happen? Will Bruce’s “brother” finally get the up on Bruce? How did the rest of the city fair in the massive attack brought on by the Owls? How will all of this affect the Bat Universe now that it’s said and done? What are we waiting for? Let’s get right into the fight and read all about the epic finale in Batman #11!

It’s all come down to this. Batman, Bruce Wayne, supposed only son of Thomas and Martha Wayne. Owlman, Thomas Wayne Jr (or Lincoln March), supposed younger brother to Bruce and son of Thomas and Martha. The battle is hard. Batman pummels and uses sheer brute force to subdue and take out Owlman, but as soon as Batman thinks he’s on the ropes, the tables turn. The fight goes through the building and as Bruce is tossed to fall to his death, that trusty utility belt comes in to play as Bats pulls out a grapple gun and pulls Thomas down with him. Oh, but wait! Owlman isn’t without his own tricks! Batman is in for the ride of his life as Owlman lays it all out for him. His history, how he came about, and through all that how waited and hoped that his brother would come for him. Bruce never showed though, but the Owls did. Oh yes, they were there! They helped him come back from the brink. They were the ones that loved him and nurtured him and helped him to walk again! Now it’s time for Bruce to feel this same sense of loneliness and rejection! Tonight is the end of Batman and Bruce Wayne! 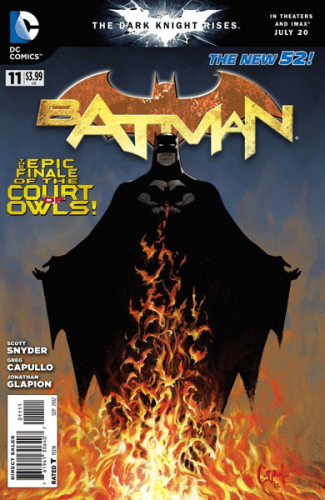 The finale to Scott Snyder’s epic is just as grand as the story has been through these 11 issues. When you think it’s over, and Batman does too at several points, Snyder pulls you right back in with a knock-out. Though the story itself is grandiose, the ending is very much between the two brothers. Bruce totally rejects the fact that Thomas could very well be his sibling. Thomas, or Lincoln, begs to differ, and is willing to take it to the ultimate extreme to show Bruce just how much he was hurt by his family abandoning him. Snyder’s dialogue isn’t overly wordy. On the contrary, it’s very descriptive and full of Lincoln’s history and utter disdain for Bruce Wayne. You feel that throughout the story and as Snyder pulls it all together, just like Bruce, we’re left wondering just how much of what Thomas said was really true. Either way, I’m almost positive we’ll be seeing more of the Court of Owls. Not in the near future at least, but they’re established, and they’ll be back.

Greg Capullo’s work here is astounding, as always. His work on Batman will set him as one of the better Batman artists, and no doubt set the standard for Bat art in the New 52. I love his lines, facial expressions, action sequences, all of it. The cover alone is majestic, but inside is what counts. Inside we hurt right along with both Batman and Owlman, we’re left feeling helpless as we watch Batman get put though the ringer and left to plummet to his death. We watch as Bruce recovers, all the while explaining to Dick just what it all means to him.  Visually, it’s amazing. Greg Capullo has come a long way and here I think he’s at his best. Keep it up. Can’t wait to see the next arc you draw!

This was one of the few New 52 titles I started picking up, and I didn’t even get it when it first came out. I started about 3 issues in, and had to pick up issues 1 and 2 for well above cover price. I’m glad I did though. This has turned out to be one of my two favorite titles, with Daredevil just a little above this. Scott Snyder and Greg Capullo put their all into this, and it shows. A very deep history of not only Gotham, but Bruce as well is seeded for us to soak into, and we watch as Batman is put through, no doubt, one of the toughest challenges he’s ever had to face. What could possibly be in store next? Death of the Family, with the return of Joker is supposed to be next, but with the tragedy in Aurora, CO, just how far will this be pushed back? We’ll just have to wait and see.

The end of an epic can only mean a breath of fresh air as we prepare for what comes next. New readers can join in and have just as much fun as we have on this ride that was Court of Owls. Scott Snyder and Greg Capullo are a team to be noticed, and if they haven’ t proven it already, buckle in. The next ride should be just as good, if not better, than this.

Review: Batman (Vol.2) #18 Sometimes, all it takes is a comic book to point you in the right direction. It's weird, I know, but…

Sneek Peek – Batman and Robin #1 Battling evil with his own son, Damian, at his side, Batman now realizes that the hardest part of the job…