If you haven’t been following us on Twitter, then you missed the awesomeness that was the live tweets during the show.  Did anybody in comic  book land catch this first episode?  I did, and I’ve got a bit to say about it, so follow me down to the next paragraph as we take a look at AMC’s Comic Book Men!

The show is simple:  4 guys,  3 of which actually work at Jay and Silent Bob’s Secret Stash, talk comics and pop culture while making deals on items brought in from customers.  It’s a little bit of everything:  rare Detective Comics, The Six Million Dollar Man dolls, Jack Kirby Thor posters, and even some Dawn of the Dead stuff!  It’s all here, and it’s all in a format for us, the comic book fan.  On top of all that, there is even a round table type discussion about what takes place during the show.  It all fits pretty nicely and it all seems to flow. 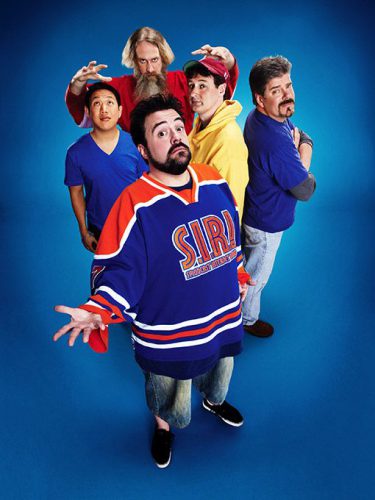 The show is not without its faults though.  It has a serious Pawn Stars feel to it, and almost a little bit of Oddities as well.  The Pawn Stars feel comes from the moments inside the comic shop.  Customers come in, they show what they are trying to sell, and the people behind the counter haggle back and forth until a deal, or no deal, is met.  If something comes in that requires an “expert”, they have that on hand too.  Whereas Pawn Stars almost comes off as rude, Comic Book Men certainly doesn’t.  It has a great vibe to it, and I never once got that rude feeling when a deal was being struck.  Yeah, they are in it for the money, but not at the expense of someone’s feelings.  That makes it a better show, in my opinion.

As for the Oddities feel, maybe that has to do with the type of customers that come in.  They seem like the every man, or the comic book fan.  The regular guy.  And yes, sometimes we need to be schooled on exactly what we have and also that we might not get exactly what we’re looking to get out of it too!

All in all, the show was a pleasure to watch.  It had great humor, the characters were very likeable, and the entire concept ran very smoothly.  The round table section of the show really pulls it all together, almost like a commentary in between segments.  If you’re in to comics, toys, collectibles, or anything even remotely close to your childhood, I think this show is going to be for you.  As the show progresses, I think it’s going to get better and even smooth out more.  As the fans speak up, I think it has the potential to turn into a show for us, the comic geek.  And who better to have a show then the biggest one of us all?  Kevin Smith has me ready for episode two.  Are you?

Hey! Lighten up! (It’s only comics.) I don't watch a lot of original run television programming. I direct college theatre, and usually when new TV seasons…

Back Issue Bin to the Future: Batman (Vol. 1) #196 Last year, I had the opportunity to go to my first comic convention here in Knoxville, TN.  It wasn't anything…

Chase Variant podcast twitter party (UPDATE) We were informed that our countdown timer was time zone sensitive and thus was not synching up the listeners. So…