“The past eleven years of my career has been building up to this book. It was really, really important to me. I told Brian, listen, if there’s bad reviews — I know I can’t separate myself from my work because I feel I am my work” – Flash artist Francis Manapul said in an interview with CBR

Once in a while in superhero comics a creator comes along and does something with a character which leaves an indelible stamp on that character. Miller did it with Batman and Daredevil, Byrne did it with Fantastic Four, Johns did it with Green Lantern. When it was announced that Geoff would be writing Flash scripts which Manapul would draw, fans were at attention. Blackest Night was a big hit and it seemed Geoff couldn’t go wrong. And Manapul had surprised fans and crtitics with his take on Superboy. Those first few issues of Flash were quite magical actually and showed so much promised. But something happened. Maybe it was the relaunch which Flash would usher in via Flashpoint, maybe Geoff’s work lost its lustre or fans hungered for something other than what was proffered. Either way, that Flash series arguably lost momentum and didn’t pan out as hoped.

Now “Blockbuster Geoff” – paired with Ivan “Nouveau Perez” Reis – has moved on to Aquaman and seems to be winning fans over with his “wink wink” subtext over in that book. That leaves the Flash in the hands of two creators who are known artistic quantities but still unproven in the script department. And frankly, I think the Flash is better off for it.

Flash #1 effortlessly established the book’s supporting cast as well as a simple plot. For some readers this first issue was perhaps over-simplified and slight but I was of the opinion that this pared down approach was what was needed to cleanse the palate of the laborious mythos-making we got from Johns’ take on the Flash. Issue #2 however, adds a solid musculature to the skeleton.

The opening scene is a brilliant example of what comics can do that movies and TV can’t (see above). In a display of Flash’s power, Manapul builds a scene with carefully chosen moments of a fight sequence. The closure that the reader must accomplish to “fill in the gaps” between the moments causes one to experience the scene in a sort of “bullet time”. It’s “layout as script” type of writing. Perhaps leaning more towards the traditional “Marvel method” and it is a refreshing change of pace. 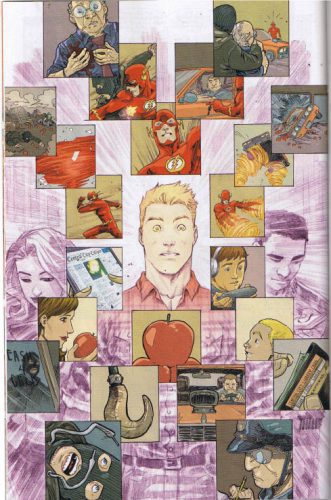 In terms of plot and back story, there is quite a bit going on here and the creative team’s solution for delivering a hefty amount of info is to introduce a new aspect to the Flash’s power: speed thinking. While trying to tap into the Speed Force in a new way, Barry experiences the world on an quasi-hyper-dimensional level, being able to visualize causes and effects (this reminded me of the second episode of Alphas season 1 in which a character experiences the world in a quite similar way). Barry sees this as an opportunity to help people. To prevent disasters before they even happen. By quickly grabbing an apple from a merchant’s street stand, Barry prevents a robbery and a murder and saves a boy from being crushed by a tow truck. All without even changing into his Flash costume and without anyone noticing. The way this is depicted is a fascinating foray into non-linear narrative, a successful one if you ask me. In a similar but more traditional style, the Flash’s thought patterns are laid out for us to catch up on Manuel’s back story and we are given more details about the main plot about cloning. To compound the effect, we see quick cuts to different geographical locations and how what is occurring in the same moment at different places ups the stakes of the cliffhanger ending. How could you not read the next issue when, obviously, the Flash can’t possibly prevent the impending disaster from occurring?

Coloring is of great importance here as well. Manapul actually developed a color scheme for Brian to use in scenes where Barry taps into the speed force (and a different one to use during flashbacks). It’s a “why didn’t I think of that” idea for dealing with speed in a static medium. And it’s certainly a much more graceful method of dealing with the Flash’s powers than Johns’ propensity to have characters describe in dialog what they are doing while they are doing it. In this book, the readers are shown how the world looks from the Flash’s vantage point and are allowed to close the gap of time in their own minds. I could go on and on about Francis’ and Brian’s intelligent use of the medium. Suffice to say that Francis’ quote in the first paragraph of this article is manifest on the page. The sincerity, creativity and enthusiasm is evident in the result.

Part of me feels as if this pace and level of quality can’t be maintained on a monthly schedule. As if it’s too good to be true. But for now, I’m just loving what’s there in front of me. I honestly can’t find anything to criticize in this book. It’s one of the best I’ve ever read. In 5 years we’ll probably look back on this Flash run as an important one in the history of the character. Miller’s Batman, Byrne’s FF, Johns’ Green Lantern, and yes, Manapul’s Flash.

StashMyComics.com is a free comics cataloging software website for organizing your comic book collection. Sign up here for a free account to start tracking your comics collection in less than a minute, completely free.

Covers to Wonder Woman #8 and Flash #8 Yes I know, there's other #8 DC covers out there but Flash has been a big hit with our crew…