I have always been fascinated by the story of Frankenstein. From Mary Shelley’s book to the countless movies, it’s a classic tale with so many universal themes attached to it. Man vs. God, man vs. self, and man vs. beast all come into play in most incarnations of the story. While IDW Publishing isn’t the first to tackle the subject of Frankenstein using comics, this particular title does a perfect job of combining the old mythology with its own new spin on the origin of the character. Frankenstein Alive, Alive! #1 immediately addresses the version of the monster we typically associate with Frankenstein (big forehead with bolts on the side of the neck) then swerves wide away from it in favor of a more realistic and darker story. In other words, this is not your father’s Frankenstein.

We start off in an old time carnival setting where the monster of Frankenstein is employed. He is, of course, part of a side show attraction and has found he can make a decent living just being himself and scaring the crowd. It is set in the time period of the depression, so any job where you can earn a decent wage and keep yourself fed is coveted. Although often retrospective about his existence and purpose in the world, the monster of Frankenstein seems content where he is with his fellow carnies. Here he is accepted and can even make an honest living. We find out however, the road to this point in his life is paved with sorrow and heartache courtesy of his creator Dr. Frankenstein. 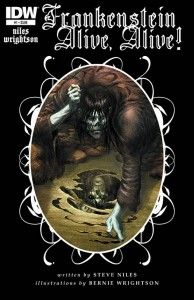 The rest of the book serves to tell the story of the monster and his unfortunate reanimation and all the consequences that come with it. Due to Victor Frankenstein’s abandonment of his creation, his monster is born without morals and commits crimes out of pure ignorance. Because he later comes to realize the results of his actions he leads a miserable life feeling neither dead nor alive, only hoping to wipe out his own existence. While even death itself eludes the monster, we get to see a tense confrontation with Dr. Frankenstein. It is a bitter sweet goodbye as the doctor was the first thing he saw and yet rejected him. Frankenstein’s monster heads to the top of a volcano where he seeks to end it all. This is where the issue ends and we are left wondering what happens to the monster that enables him to escape his fiery death and wind up working in a carnival? Also, what is to become of Dr. Frankenstein? Reason enough to pick up some more issues in my opinion.

The dialog is really deep and requires a few reads to really appreciate the epic scope and meaning behind the words. The writer, Steve Niles, is very passionate about Frankenstein and says as much at the end of the story where you are treated to a multipage interview with him describing his first encounter with the character. There are also 6 pages of the story from Mary Shelley included as a bonus. That makes this a must have for true fans of the tale.

The art is in black and white which may be a turn off to some, but it serves the story well given its setting in the 1940’s. The illustrations are done by Bernie Wrightson who is a legend in the comic book business particularly in the realm of horror themed titles. He is probably best know for helping to create the original version of the Swamp Thing with Len Wein. This version of Frankenstein’s monster is drawn with long scraggly hair and is a very imposing figure. He seems to be standing at least seven feet tall and his face resembles more of a dehydrated zombie which is a stark contrast to the Boris Karloff monster that has been seared into our minds. The style of the art is very realistic, but with a pleasant roundness to the characters complemented by deep contrasts of light and dark throughout. It’s gorgeous to look at and you’ll find yourself going back just to admire the work. I normally don’t gravitate towards black and white comics, but this is one case where color is not needed to move the story.

Fans of monsters, horror, and classic tales won’t want to miss out on this gem from IDW Publishing.

Advance Review: Baron Von Frankenstein – A Hollywood… I love the old Hollywood monsters. I can remember back when I was a kid, sitting in my uncle's living…

Review: HunterPrey HunterPrey is the first comic StashMyComics has reviewed from Broken Icon Comics and I must say, it did not disappoint.…

The Dollar Box: Dark Genesis! A new year brings a new Dollar Box column, where I look at single-issue comics stories with an original cover…