By now, we’re all very well immersed in the idea that is Marvel NOW! We’ve seen the teasers, we’ve seen the colored, uncolored, inked, not inked, and just about everything else they can toss at us to get us ready for the “soft” change to the Marvel Universe. With the release of Uncanny Avengers meeting with mostly good reviews, Marvel NOW! seems off to a good start. I personally didn’t care for it that much, but maybe I need something more. Maybe I need to see the larger picture when it comes to an entry point for the change in the Marvel Universe. Marvel took myself, and just about everyone else in mind and put out Marvel NOW! .1. the point one comics have always been a way for new readers to jump into a story or title, so it was only natural for a .1 for Marvel NOW! Is it worth the massive $6 price tag? Do the six stories get us geared for an awesome winter in comics? Can any of this even be compared to DC’s new 52? I’ll try to answer that and more as we take a look at Marvel NOW! .1.

Nick Fury and Agent Coulson are being led by Commander Hill to an interrogation room. A man claiming to be from the future is being held there. He appeared on the NYSE floor, started trading, and had control of the global economy in under three hours. It seems like all this was done to get the attention of Nick Fury (the movie version) and it worked. Hill has called he and Coulson in to talk to this man. Now, here’s where it gets interesting. This man from the future isn’t here to warn us of some dire threat to humanity. He could care less about that. What he’s here for is to tell them what is to come.The changes that are taking place right now, right under their very noses. As he does this, this is how we are introduced to Marvel NOW! 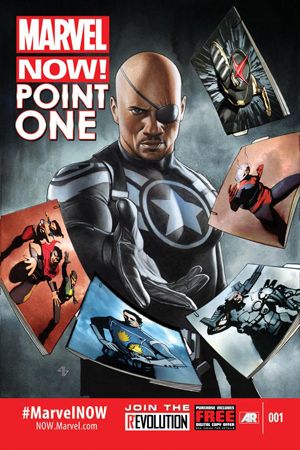 It’s clever of Marvel to weave a story like that. We could have gotten a comic of 6 unrelated stories told one right after the other, but we didn’t. The stories themselves are individual, sure, but it’s all woven to fit together. I like that. The main story, simply titled NYSE, is what keeps it all in. Nick Spencer does a great job of keeping all the stories under his umbrella and making it not only work, but work good. As Nick and Coulson question this future man, we’re told about the likes of Star Lord, or moreover the very start of Guardians of the Galaxy. With Brian Michael Bendis penning that, it really grabbed my attention and actually has me a little stoked for a new Guardians title. Steve McNiven‘s artwork is stellar too. The story is short, but action packed with great visuals. We then skip right on over to Nova and a nice little fight with Diamondhead. Jeph Loeb writes a quick one here, but it serves its purpose. Ed McGuinness‘ artwork adds great detail to this too. It’s flashy, witty with the dialogue, and pretty fun. This could be a good read.

This next one had me a little confused. Miss America, from Earth-212, is brought in by Loki (a kid?) to help him form an Avengers team to take out Wiccan from Earth-616. Kieron Gillen‘s story was OK, but nothing to sneeze at. I might miss this one. Next up is Ant-Man and his destruction of Doom art! Seriously. Matt Fraction‘s story was great, if a little heart breaking. With Mike Allred‘s artwork attached, this story should sizzle. Last, but not least, we have Forge in a story titled Crazy Enough. Dennis Hopeless‘ story is very solid, and with Gabriel Hernandez Walta‘s sketch type artwork, it really gives off that scatter-brained feel. Forge is talking to himself, answering himself, and arguing with himself, but it’s woven together so nicely. A nice little surprise comes at the end of that. Everything comes back to Fury as the issue ends, literally, with a bang.

I can honestly say that I like how this is put together. It’s got a great flow to it, and will be very easy for new, or lapsed readers to jump on here. Some of it can be a little confusing, but for the most part, Marvel did it right. The price tag is a little high, so some of us might not be comfortable choosing this over two other issues we could have instead. If you’re full speed ahead for Marvel NOW!, then this is perfect for you. If you’re brand new to Marvel, start here. If you’re coming back into comics after a long time out, it’s a good way to see where the universe you left is now at. I don’t honestly think this can be compared to DC’s New 52. It just feels different. DC rebooted nearly everything. Took most of it and started from scratch. Here, Marvel is just mixing the ingredients again. The universe itself hasn’t changed. We’re not back at square one, essentially, and it’s not like the start of the Ultimates line. I now get the idea of the soft reboot. It’s this.

I’m not 100% sold on Marvel NOW!. Superior Spider-Man has me a little scared, as does All New X-Men. I’m not so crazy about those ideas, but .1 has sold me on at least Guardians of the Galaxy and Ant-Man. I’ll add those to my pull-list. With the rest, I could care less either way. It might be different for you though. Marvel NOW! .1 isn’t necessary, but it does what it’s intended to do. It gets you started, if not a little pumped for some of the stuff coming out from Marvel within the next few months.  It’s no New 52, but it’s a start.

Art: 7/10
Script: 7/10
Parental concern: None. There is one giant Brain Monster though…

Marvel…NOW? So by now I'm sure you have heard all about the Marvel NOW! news. For those of you who haven't…

Marvel releases new Legends series of action figures Wow. Well our good old friend Jason Newcomb passed this tidbit of information to me over the week. It looks…