Memetic #1 is the first issue in a new limited series from the minds of James Tynion IV & Eryk Donovan at Boom Studios.

The book focuses on an internet meme known as the “Good Times Sloth“. The meme shows up out of nowhere and goes viral almost immediately. The image causes a strange sense of euphoria in those who view it and it doesn’t take long to rack up over 500 million hits across social and traditional media. However, it is this rapid exposure that leads to a cataclysmic event later in the issue that leads to the end of the world as we know it.

Interestingly, one of the main characters of this piece, Aaron, suffers from a hearing defect and color blindness. While this may be viewed as a disability by some, it actually works in his favor as the meme has no effect on him even after he spends hours trying to work out why it affects people so strongly. 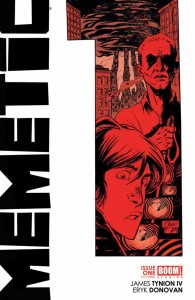 There is another character, Marcus who suffers from macular degeneration and is also impervious to the effects of the meme. However, where Marcus differs to Aaron is in the fact that he is aware of the efforts of the US government to weaponize memes and this introduces the reader to the wider conspiracy that runs throughout this first issue.

Tynion does a grand job of exploring the idea of a meme and what that means in a biological sense. While many people don’t quite realize that memetics have their  history grounded in genetics and biology, Tynion supplies this information without going overboard. Similarly, it would have been easy for a writer to use this medium to condemn social media but here it is merely the mouthpiece for the larger story.

Eryk Donovan’s art  works well in this issue mainly owing to the work he has done to make the world of the comic page mimic our own as closely as possible. Without resorting to outrageous lengths, Donovan manages to capture the social media crazed landscape in which we live and this is where the art draws most of its impact. I don’t think it is too outlandish to conceive that a story such as this may occur in real life given the right set of circumstances.

Boom Studios has been getting better and better at releasing these limited issue runs that focus on new and original story ideas and in my humble opinion, Memetic #1 is likely to become another arrow in an already well stocked quiver.

Parental Concern: Mild. There is some bloodshed towards the end of this issue that might shy away younger readers. Probably best to leave this to the 13+ age bracket.