If Jonah Hex was a woman his name would be “Rebecca Cross”. At the end of the  last issue of No West To Cross we found our favorite cowgirl “Becky”, as she prefers to be called, in a mess of trouble courtesy of her enemy Bucky Dan’s men. Becky took it upon herself to try and track down a little boy being held against his will for debts unpaid to Bucky. For a more proper rundown on issue #1 you can read fellow contributor Tim Morse’s review here. 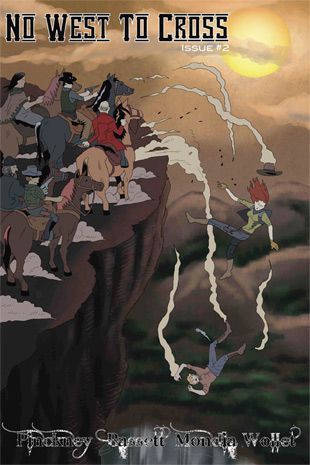 Keep in mind all this great action you are about to read about happens in just the first 10 pages of the book: So we start off with Becky behind bars, but she doesn’t seem too concerned at the moment. She finds she has a lot in common with the young man sharing the cell with her for the moment. Both of them seem to have issues with Bucky Dan that have led to their now unfortunate circumstances. Through some sweet talking and the young man’s belt, Becky is able to grab the guard while her new friend “Ray” grabs the keys. Just when they think they are home free Becky and Ray walk out the front door to a whole mob of Bucky Dan’s men who heard the commotion inside. But Becky’s always got an ace up her sleeve, as we find out, and calls for her horse “Lucy” to come busting through the crowd. Becky’s six shooters are blazing as she and Ray climb on to Lucy and ride out of town with Bucky Dan’s men close behind. The duo has a good bit of space between them and the angry mob, but they are quickly approaching a cliff. How are they going to get out of this one? I’m not going to spoil it for you because it’s really something you need to pick up for yourself and read.

This little independent gem is now available at Graphicly.com under the publisher name Sequential Geek. It is a classic adventure/western tale that is a breath of fresh air in comics today. I’ve read a number of independent takes on the western genre, but most feel the need to throw in magic, vampires, or zombies. Creator and Writer David Pinckney does a fantastic job of spinning this tale without the need for far out mysticism to make it interesting. The strength of the title lies in the main character Rebecca Cross and she instantly becomes a strong female character that you like right from the get go. She is hard headed, quick witted, and confident in her abilities to handle herself in this so called “man’s” world. Becky is also a hero to the little man and has a charming wit about her that keeps the story light when it needs to be. The rest of the art team does a great job at setting the western vibe and its definitely in the same stylistic vein as a most Johah Hex books, which I love. The pencils done by Zach Bassett are precise and deliberate with a unique style all their own. The inks by Peebo Mondia never overshadow the pencils and are dark and crisp where they need to be. The colors, also by Mondia, are a nice mix of oranges, yellow, browns, and grays. Letters, by Adam Wollet, are done very well within the existing art style and big action letters are always shown in dark red to stand out.

So if you like westerns, adventures, or even strong female characters you won’t want to miss picking up No West To Cross. Fans of Johah Hex and All-Star Western will feel right at home with this title from an artistic standpoint and fans of great fiction will appreciate David Pinckney’s knack for writing interesting characters. Looking forward to the third issue of No West To Cross!

Review – No West to Cross #1 Let me just start right off by saying that I loved this issue.  I absolutely enjoy how when I get…

Preview: No West To Cross Indie creator David Pinckney gives you a peek at his 3 part mini series No West to Cross. It tells…