Action Lab Comics releases it’s latest ongoing in Order of Dagonet with script by Glyph Award winning writer Jeremy Whitley and the stunning artistic talents of Jason Strutz. Whitley has dazzled audiences with his darling all ages tale, Princeless, but how does he fair with adult material? Also, how in the world have I not heard of Jason Strutz with his brilliant eyeball popping artistic abilities?!  Thanks to him, I now wear an eye patch…

So what’s this book about and why did they misspell dragon? First, Dagonet is the correct spelling of the legendary King Arthur’s jester, Sir Dagonet. Despite his cowardly ways he earned his place at the Round Table regardless of many considering his knighthood to be a joke! Legend became reality when King Edward VIII later created The Order of Dagonet to honor achievements in the fields of entertainment (think Sir Elton John), which is explained in a nice little history page in the back of this issue. 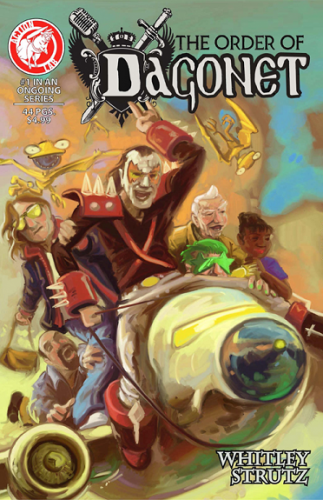 As you may have assumed, all the characters in The Order of Dagonet are entertainers that have in fact been knighted.  The ragtag group includes an aging rock god, classically trained actor, writer of boy wizard books, and a pop star in ridiculous glasses! Issue one unites them through a call to return to their homeland to save the British Empire from an invasion of magical mythological creatures!

Whitley’s story paces well, and gives equal time to each character’s introduction. With the size of the cast in the book it was a good idea to give issue one 44 pages. There is seriously so much to take in that the size of the book doesn’t become a concern. I really only had a small problem with one of the characters, the rock star, because of the portrayal of his thick accent. It might just be me, but I found myself rushing through his parts after giving up on comprehending his lines! Despite this, each individual stood out as unique in the story with my favorite being Laverne, the fired up bookstore employee with an attitude (not British).  I was excited to see her join the adventure!

It was a little weird for me going from Whitley’s Princeless to The Order of Dagonet because of the adult oriented humor. I’ll admit, that sort of thing doesn’t appeal to me in general, but it stood out in even greater contrast making that transition. If that’s your thing, then hey it’s there for you to enjoy.

Have you heard of Jason Strutz? No? Look at the preview art down below. Holy crap, right?! It’s refreshing to see a style unlike anything out there (that I know of) in a comic book. I’m not 100%, but I think he used colored pencils…just wow. Everything pops off the page, and I seriously found myself distracted just pouring over the pages checking out his work. I want more Jason Strutz!

Would I continue to read this series? Yes. It’s a kooky romp with some oddball characters that will be a blast to follow. And, we haven’t even seen the characters in official action yet! I’m looking forward to issue two (coming in December!), and losing my other eye to Strutz’s art skills. I encourage you to step out of the box and give the magical Order of Dagonet #1 a read! 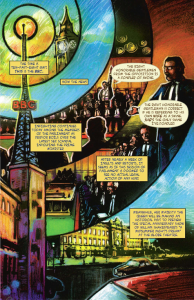 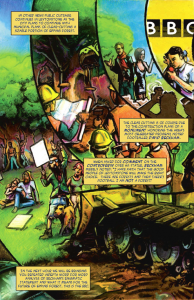 Interview with 2012 Eisner Nominee Jeremy Whitley The 2012 nominees for the Eisner Awards have been announced, and Jeremy Whitley's Princeless has garnered two well deserved nods for…

The Fangirl Concern: Preview Princeless Vol 2 #2 It's time to make sure you get your pre-orders in for March. That's especially true for smaller market publications. Lately…

News Flash: Cover for Princeless #2 Slams Risque Comic Art Regardless of your position on how women are drawn in comics, you have to admit a lot of artists go…