Red Lanterns has been a title I’ve been up and down on since it came out. On the one hand, I love anything relating to Green Lantern and when they debuted I thought Atrocitus and the Red Lantern Corps were pretty cool. But, on the other hand, I think some of the intrigue is lost by delving too much into the backstory of Atrocitus. This title has been enjoyable though, I’m glad we have a RL of Earth that is human(even though Dex’Starr is an awesome character). Now, StashMyComics.com very own Chance Peterson reviewed this issue during the Chase Variant Podcast, but I wanted to take a crack at it as well, as it’s one of the few DC titles I pick up.

This issue opens with Bleez apparently in full control of the Red Lanterns and leading them on an attack against some Sinestro Corps deserters. Cut back to where the last issue left off, Guy Gardner facing off with the new RL of Earth, Rankorr. Guy attempts to relate to him, and Rankorr does something surprising for a Red Lantern, he speaks. But, as Gardner is busy helping civilians, Rankorr takes off being pulled to Ryut. Atrocitus is then shown to be tracking the corpse of Krona to a place where Atty had disposed of abominable experiments. At that moment he is confronted by one of his old creations who makes it clear that he wants to destroy him. With victory in Atrocitus’ hands Rankorr lands and distracted by his arrival allows his creation to deliver spike through the chest and then turns his sights on Rankorr. 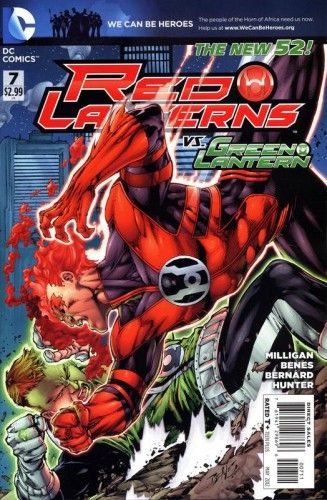 I am interested to see where Peter Milligan’s writing will take Red Lanterns. I wasn’t too sure how well humanizing Atrocitus was going to work but I have a feeling Milligan can pull it off. The development of an Earth RL is long overdue, although I am unsure why the ring chose him when Dex’Starr is already in place. I do like the angle of Atrocitus’ failed experiments coming back to haunt him.

The art from Ed Benes is nothing short of gorgeous. He can draw the human characters just as well as the grotesque creations you will find in this issue. The costume design for all of the RL’s is different which is good to see, too much monotony from the backup characters gets old. One thing is for sure, the art is definitely a highlight of this book.

I really want this title to do well. The Red Lanterns look cool and have a unique skill set, even among the other light wielders. I’m still not sold on the idea of turning them from mindless rage-obsessed killers to some kind of bringers of justice, but I’m going to see how it all plays out.

If you haven’t been reading this title I would recommend it. But, just like the other Green Lantern related titles, if you aren’t familiar with the events before the 52 launch you will probably be a little lost since that continuity wasn’t affected.

Art: 8.5/10
Script: 7/10
Parental concern: There is some violence of the grotesque nature, but I’d recommend for teens.

Sneek Peek – Red Lanterns #1 Atrocitus and his Red Lantern Corps return in their own series, battling against injustice in the most bloody ways imaginable!…

Review – Green Lantern: New Guardians #6 If you follow Green Lantern you should be familiar with the war of light and the emotional spectrum, so you…

Review – Green Lantern Corps #6 Since DC launched the New 52 I have only been picking up Lantern related titles. I will go ahead and…