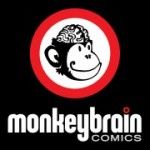 Not content with one Monkeybrain Comics project, Jeremy Holt has had another cooking, with Curse co-writer Tim Daniel and artist Joshua Gowdy. The new title Skinned centers on a society that views reality as a disease. No one is how you want them to be and reality is often so much more dull than a dream. To fix that, each citizen of cView City is fitted with a special pair of lenses at birth, lenses that allow them to view the world as they want. Each person sees the world differently, but it’s only when Aldair, a wealthy heiress, gets a glimpse of the world as it really is that things start to change.

The book begins with a new beginning, that of the birth of a child. As the birthing progresses, the view starts to change, jumping from futuristic sci-fi, to idyllic Arabian nights, to some sort of Mad Max inspired theme, all in the course of a few panels. While the baby’s parents want her to be fitted with the Occupeye lenses, those that let her control her visual world, her sister Aldair doesn’t, but she’s quickly overruled. The story quickly cuts to an open market in what probably passes for the ghetto in this world, an area where it seems that Occupeye isn’t quite as effective. Buoy is a poor teenager, one who’s been picked to possibly be a servant for the upper class. When Buoy reluctantly goes to this selection, Iris and Occupeye malfunction, letting both he and Aldair see the world in a whole new way. 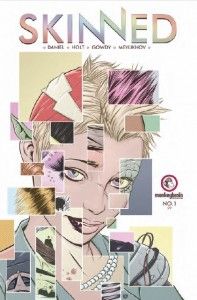 Tim Daniel and Jeremy Holt weave the beginnings of a love story. Aldair seeing, quite likely for the first time, what a person truly looks like triggers something in her, something new and exciting. Daniel and Holt construct an extremely interesting world, one with lots of nuances and technology, but also an unstable, ever-shifting world as nothing is really as it seems. This shifting world makes Gowdy’s art that much more interesting, where quite often every second or third panel features the characters in a different setting, costume, or style. The fickle nature of the visuals makes nearly the entire book the product of an “unstable narrator”, to borrow a term from literature. Nothing is as it seems, so the reader has to question a few things. And that’s part of this book’s charm. There’s something about this novel idea, a world where nothing you see is actually real, that makes Skinned entirely engrossing. Each person has their own reality and we’re unaware of it until we see a tiny peak in a panel or two.

Skinned is a great debut, pulling the reader into the world and setting up what should be an engrossing story. Daniel and Holt begin to tell a love story set in a world that seemingly doesn’t allow for actual love. Gowdy’s art shifts and changes, putting the characters in different settings with almost every panel. All in all, it’s a fantastic first issue and a story that should hold much in store. As with all Monkeybrain books, Skinned #1 can be found on Comixology for just 99¢.

Review: Curse #1 Boom! makes a little bit of a return to its early roots with Curse, a new horror comic from writers Michael Moreci and Tim Daniel and…

Review: The Massive #1 I just want to say, I’m a huge fan of Brian Wood. DMZ? Loved it. Northlanders? Best comic ever to…