Jason Aaron and Jason Latour are not strange names to anyone who’s been keen on their Marvel titles lately, helming some of the biggest stories of the last few years. But, now they’ve come together to tell a completely different kind of story at Image, a story of the South, growing up in a small town, and trying to escape it all, only to be sucked back in. It’s simultaneously a love letter to the South and hate mail, and that’s entirely appropriate.

Earl Tubb returns back to Craw County, Alabama, to pack up his old house and move on. His uncle is entering a nursing home and he’s the only one left to deal with cleaning it all up. Earl hasn’t been back in 40 years, not since his dad died. On his first trip back home in four decades, Earl starts to notice that his hometown has changed, has started to be under the thumb of someone known simply as “Boss”. Boss seems to run Craw County now, and Earl quickly gets on his bad side. 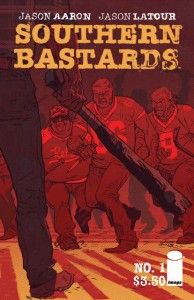 Jason Aaron and Jason Latour quickly get this book rolling. Earl Tubb is a man you can’t help but like, and he’s a man with a good conscience. Aaron writes the story of a man who wants to leave his past all behind, but can’t help but let it drag him back in and make him feel guilty. Latour’s art fits the almost noir feel of the story. The muted palette and the heavy use of red adds to the violence and grit that quickly shows up in this small Southern town once Earl Tubb arrives. There’s a sense of despair and guilt, all coupled with a sense of anger that goes into Earl and his trip home. It’s what the South is all about.

As Aaron touches on so well in the first part of the backmatter, the South is a place that you can easily come to both love and hate, miss and fear. I’m very familiar with these sentiments. Aaron grew up in Jasper, AL, while I grew a couple decades later and about 100 miles east in Jacksonville, AL. They’re roughly the same size, just in different parts of the state. Those parts of the South are a special place, idyllic and peaceful, while often primal at the same time. There’s plenty of religion and faith thrown around, but it’s mixed with hate and prejudice. It’s beautiful country, but scars run deep in that part of the country. I could walk to three different churches in less than ten minutes, but none of them make you feel welcome. It was a beautiful town, but it was built upon what used to be a American Indian settlement, with the town hall sitting right where the chief’s residence used to be. It was a great place to grow up, but not somewhere you wanted to spend your life. And Aaron and Latour capture this perfectly. Small Southern towns are often like a black hole, sucking in people unfortunate enough to not escape its grasp. I’ve lived in three different Southern states (Alabama, Mississippi, and Lousiana), and lived in Illinois, but there’s something to the South. Southern Hospitality is very real, but no one hates like they do in the South. It’s scary and comforting and you never want to leave but never want to go back. And Southern Bastards captures this in a way that I didn’t know was possible until I read this issue.

Southern Bastards might just be Aaron’s best work since Scalped. This first issue is one of my favorites of the year. It hits all the right notes and sets up what is sure to be a great sort of Southern noir. Do yourself a favor and check it out.