Southern Bastards is arguably one of the best new series this year. Jason Aaron and Jason Latour  get back to their Southern roots as they head to the fictional Craw County, AL, and explore the residents of the small town and surrounding areas. With this newest issue, the first of the second arc, the book changes directions. Southern Bastards was a much different book in issue 1 than it was at the end of issue 4 and even more so at the beginning of 5. Let’s see how this new direction stacks up. 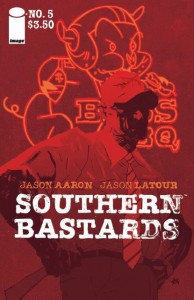 After the events of the last issue, Coach Euless Boss heads to a funeral, with much trepidation on the part of his hired men. Throughout the issue, we also see who Coach Boss used to be before he became the big man in Craw County. Also sprinkled throughout are nods to people that we may see in future issues of Southern Bastards, though whether they’re friend or foe to Coach Boss remains to be seen.

Again, Aaron and Latour craft a fine issue. After issue 4, we see that the books true focus was in the title all along and we dive into the life of Coach Boss, legendary high school football coach and ringleader of plenty of illegal things in Craw County. Seeing not only who Coach Boss is today, but who he was before his rise to power and legend is an interesting dichotomy. That the Jasons are both Southern boys helps greatly in the depiction of small town life in Craw County, giving it great authenticity and making it feel like a small Alabama town should. Aaron’s characters continue to grow and gain depth, even the less likable ones. Latour’s art continues to be just the right touch for the book. He draws mean old men and teenage athletes with equal deft, giving them both their own sort of weight and dignity.

Southern Bastards maintains the high quality even as it shifts gears a little bit. After the big ending to issue 4, this issue keeps rolling. Digging into the backstory of the most infamous man in Craw County should create for an interesting arc, even as it seems to set up a whole lot more. If you know me or follow me on Twitter, you know that I’m absolutely in love with Southern Bastards, especially as a guy from a small Alabama town not too much unlike Craw County. The book has yet to let me down and I have a feeling it’ll keep going strong for many months to come.

Leo (@LFLJ) is a real life Southern Bastard, originally hailing from the mountains of Alabama, and talks about comics on the internet a lot. He podcasts, reviews here, and also does regular interviews at Multiversity Comics. He even interviewed Jason Aaron once.

Review: Southern Bastards #1 Jason Aaron and Jason Latour are not strange names to anyone who's been keen on their Marvel titles lately, helming some of the biggest stories…

Review: Goners #1 From relatively new creators Jacob Semahn and Jorge Corona comes Goners, a new comic from Image. Goners follows the Latimer family, a family that has been entrusted with protecting…