Image has released quite a few sci-fi comics in the last year or so, including Prophet, Saga,and others. The latest sci-fi release is Storm Dogs, a comic created through the collaboration of David Hine and Doug Braithwaite. Will Storm Dogs add to the string of successes that Image is having at the moment, or will it fall flat? Below, you’ll at least have my thoughts on it.

Starting with a bit of exposition about a planet known as Amaranth, a place coveted for its resources, the book shows off beautiful landscapes and animals. We then cut to a team of investigators sent to Amaranth by the Union in order to look into some strange deaths that have been plaguing the planet recently. The team meets up with local law enforcement in the settlement of Grievance. In the middle of their meeting, a storm rolls in, and storms on Amaranth are deadly to any form of life that didn’t originate there. During the storm, the crew receive an alert about an attack that may be related to why they’re on Amaranth in the first place. Suited up in protective gear, they arrive at the site too late, with most of the people involved in the attack and the one who managed to escape the initial attack dying from the storm. As they survey the scene, they come face to face with one of the native species of Amaranth: the Elohi. 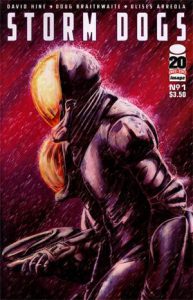 David Hine is doing a wonderful job of writing in this first issue, I feel. Within the thirty or so pages, we learn not only of the characters, but something of who they really are. We learn of their lovers, their desires, their fears, and much more. While not always obvious, there is a lot of characterization going on in these pages. Hine builds a world quickly and efficiently and grounds it well with his characters. I look forward to much more development to come in the next issues.

Doug Braithwaite is not a name I’ve heard much of before. I don’t know if that’s a fault of my own, but I’m a bit mad at myself that I’ve never looked at his other work. He makes Amaranth and its flora and fauna absolutely beautiful. Even the storms, with their flashes of lightning and billowing clouds, are works of art. I’m more than ready to spend the next five issues looking at the beautiful landscape that he puts before me.

I’m not going to lie, the first few pages of the book immediately brought the movie Avatar to mind. I was a fan of the movie, so I was okay with that. As I read on, I realized that this book might be more than an Avatar clone, that it had much more to offer. Even though the ending also immediately harkened back to Avatar and the Navi, I still feel that this book will be much more than what it appears. The story seems as if it could lead to very fulfilling places within the universe established in Storm Dogs. I’m around for length of the miniseries, all six issues of it. I think it could go places and I’m willing to bet on it.

Art: 9/10
Script: 9/10
Parental concern: Moderate. A dude’s skin basically melts and you get some blood and guts.