My podcasting cohort, MattB is a pretty big fan of this book. In fact, he chose it as the subject of his review in our very first podcast. At the time, my basic assessment of Scott Snyder’s Swamp Thing was that it had not wowed me yet. I dropped Batman – by the same writer – at issue #2 but kept reading Swamp Thing because of it’s close relationship with one of my favorite titles, Animal Man. In Animal Man, Buddy Baker and his daughter nicknamed “little wing” are tackling the otherworldly forces of life. In Swamp Thing Alec Holland reluctantly chases down the link connecting the two books together, a young boy named William who is becoming the avatar of “The Rot”, ie. the force of death and entropy. So on one side of the fence, fleshly life and it’s associated lore are prepping for a war against The Rot. On this side, plant life aka “The Green” is doing the same. These two books mixed together are pretty much a tailor-made concoction designed to quench my thirst for superhero mythos. It’s like Bacon Vodka! There’s just one exception though.

Scott Snyder is probably the hottest “new” name in comics right now. The American Vampire writer gained “big two” accolades while writing ‘Tec and is amassing praise for his work on Batman. He’s currently DC’s brightest hope to replace Geoff Johns whose comic book magic seems to have waned since Blackest Night. Why are Snyder’s scripts boring me then? 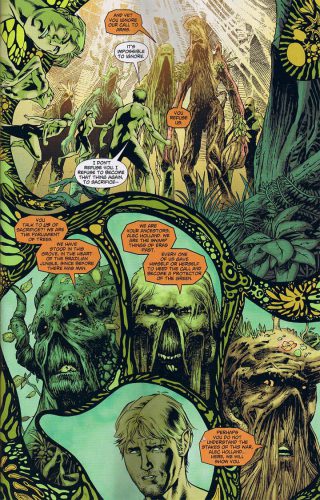 Well for one, Snyder’s background is in prose and this becomes manifest on comic pages who are transparently built for the purpose of catching the reader up or building back story. These things are not inherently bad if done with a certain amount of discretion or perhaps irony. But Snyder’s info-dumping technique leaves a lot to be desired. The dialog is often redundant and the pace is plodding. The problem is compounded by the fact that Alec Holland, the protagonist, is a stagnant and stubborn character who seems almost meta-textually determined to be in conflict with the story trying to be told, refusing to budge on his point of view. Try as they might, penciler Marco Rudy’s ornate and baroque layouts can’t liven up the narrative and probably weigh it down even more by virtue of their complexity. What makes the book’s problems even more evident is that Lemire and Foreman are achieving the same lore-building results in Animal Man but keeping me (mostly) interested while doing so. I can certainly see the forest through the trees however. Swamp Thing certainly contains engaging concepts. But the presentation isn’t as great as the ideas. I guess not everyone has the mutant ability to transmute raw data into compelling narrative. That’s Jonathan Hickman’s thing.

William, the villain is an issue as well. Though the basic concept of the “Avatar of Rot” is an interesting one, very little is put in the script for me to believe this character. Why is he basically the impending “hell on earth” other than the fact that he’s related to Abby. Do we know why it is he who has been chosen? In Alec’s case, the problem with the character is that he doesn’t change. But with William, it’s that he changed to suddenly. Unless you consider geographical relocation a character arc, William went from bubble boy to super-villain in the blink of an eye simply by virtue of the rot running “in the family”. Unless I’m forgetting some elements of back story. Which is likely as the back story sequences are generally unmemorable.

There is improvement in the dialog and narration department, thankfully. Issue #3 was so heavy with word balloons it’s being used as ballast. But there are less redundancies this time around. A much welcome change. Another ray of hope: by the very end of this issue, there finally appears to be some kind of change in Holland’s hardheaded attitude.

I’ll keep reading. The ideas are good and interesting and I’m liking the way this is tying in to Animal Man. In this case, if I want the baby, I’ll just have to keep the bath water.

For a dissenting opinion, listen to our podcast by clicking here.

Review – Swamp Thing #1 So it's happening. DC is relaunching. Fans are buzzing and the reviews are flooding comic sites all over the internet.…

The Dollar Box: Dark Genesis! A new year brings a new Dollar Box column, where I look at single-issue comics stories with an original cover…

Chase Variant Podcast – Episode #0 About 3 months ago a group of SMC members from the forums got together on Skype to just geek out.…

StashMyComics.com Podcast – Episode #13 The allegedly unlucky #13 strikes MattB as he deals with many forces against the creation of this podcast. Fear not…