I just want to say, I’m a huge fan of Brian Wood. DMZ? Loved it. Northlanders? Best comic ever to involve Vikings. And the rest of his work is just as stellar. Needless to say, I was excited, nay, ecstatic, about The Massive when I heard about it. This was something to fill the large hole that he had left behind when both DMZ and Northlanders ended those long months ago. Because of my anticipation and love of his former work, this comic had a lot to live up to. Did it live up to it? Read on to find out.

What does it mean to be an environmentalist after the world’s already ended? In The Massive, we follow Callum Israel, a former mercenary turned environmentalist, and a group known as the Ninth Wave as they live in a world after “The Crash”, the effective end of the world, the apocalypse. Now, they travel the oceans, searching the world for information about the Crash, and for their missing sister ship, The Massive. 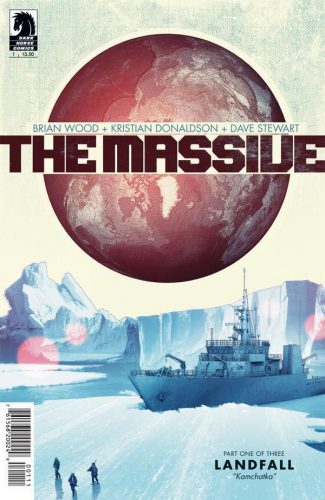 The plot centers mainly on Kapital, Israel’s main ship, and a blip on the radar they think could possibly be The Massive. The blip turns out to be pirates, and they’re headed straight for Kapital. Callum’s apparent love interest, Mary, leads a party to meet the pirates and makes sure they never reach the ship. At this point, we get some back story on “The Crash”, and the catastrophes that occurred worldwide. Then we cut back to Callum and the rest as they worry about Mary and take precautions for if/when the pirates reach them. We then get a few more pages about the group’s journey up until this point, and then leave off with something of a cliffhanger ending.

Brian Wood wrote this little snippet of the overall story so well. With a beginning utilizing in media res and the rest of the story having just the right amount of overall plot exposition to give us a little story to chew on, but not enough to get satisfied with what we know, he sets up the story nicely, and makes you want more. What really happened with the world? Where did The Massive go? These and other questions are left unanswered, and you want the rest of the series right the heck now so you can find out the answers. As always, Wood pulls you into his world and doesn’t let you go.

Kristian Donaldson’s art is beautiful. I love his character art so much. His faces are so expressive and his characters seem so real. The lines are clean, the faces expressive, the art wonderful. Could you really ask for more? Well, you could. Dave Stewart does a great job on colors, making the stark setting of the Arctic work so well with the reds and oranges that feature prominently on such things as the life vests. The art compliments the story oh-so-well. It just brings it all together so nicely.

Overall, this issue met my expectations. Could this series shape up to take its place alongside the other great things that Wood has created? Most likely. Will I be there every month to find out? Definitely.

The Fangirl Concern: X-Men’s All Female Team and the… Last week, the suspicion that Marvel's XX teaser banners were hinting at an all female team were confirmed. What was…