Schism has ended and the teams have been chosen. Wolverine and his team of X-Men have left Utopia and traveled back to where it began Westchester County, New York. Wolverine has decided to reopen the mutant school and rename it the Jean Grey School for Higher Learning.

At the end of Schism when I found out that Wolverine was going to be reopening the school I was excited. I thought “wow, that will make for an interesting story that I could get into”. Then I found out he was renaming the school to the Jean Grey School For Higher Learning and I was like, “uh not that big of a deal, I’ll still read it”. Then I saw the preview and thought “Oh god! I hate the art,” but still I picked it up at my LCS and gave it a shot. 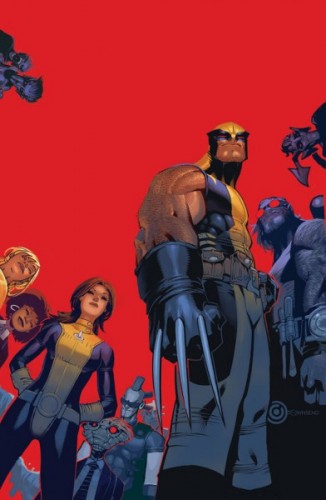 No one would have expected that Logan would be the one to reopen the Xavier school, not even Xavier himself. This is where the story starts for us; Wolverine and Xavier are discussing the reopening of the school. I mean how much credibility does Logan have as the headmaster of a school? As he himself says in the issue the only education he has is being raised by wolves, how can he teach these kids. Lucky for him he has a whole team of X-Men to help him out, although not all of them are a much better fit.

The whole book has a hectic feel to it that one would expect from the first day of school. Students are getting used to being in this new environment and wondering what is going to happen next. The teachers are also getting situated and trying figure out how to get the kids to listen to them. For many, this is a new experience. The young students have been on Utopia and have not had a real education and for most of the older X-Men, this is their first time trying to teach.

I do really like the whole concept of this book. It brings back a classic side to the X-Men with the school and teaching young mutants while keeping things fresh by giving Wolverine the reins. Wolverine is leading somewhat blindly and looking for the others’ help to make the school a success. That’s not something we have seen much form Logan in the past and it is helping to develop him as a character.

That is where the good ends for me. The actual writing of the story was kind of a let down. There was too much being brought in and not enough explanation to make me interested in caring. Little Nightcrawler looking gremlins running around saying “BAMF!”? Come on! It’s a sound effect. It is not yelled, get your information right. The art was far too cartoon-like with a lot of the characters having huge chins and tiny eyes. At one point Wolverine looks like he has some dull metal poles sticking out of his hand instead of his sharp bladed claws. Kitty looks like she is 12 and Beast looks ridiculous.

With all that being said, it will not kill you or anything but, I will not be continuing this series. I would like to see it received well enough to continue but maybe change creative teams. Jason Aaron’s Wolverine: Weapon X #4 was the first book I bought with my own money and I enjoyed his run on the series but his more recent work has not stood up and the art just puts the nail in the coffin. That is just one reader’s opinion and I am sure there are plenty of people who will disagree so if you are interested in the idea check it out for yourself.

Review: Wolverine and the X-Men #4 Wolverine as a Headmaster?  Where have I been?  Last I knew, he was the best there is at what he…