Wolverine Annual #1. Are you as confused here as I am? I know the Wolverine series has taken hiatus, but it has always picked back up where it left off. Currently we are at Wolverine #312, which also came out on August 22nd. Why then aren’t the annuals working the same way? I’m understand that it’s the first annual of this volume of Wolvie, but you get where I’m going with this, right?

Now to the topic at hand. Was Wolverine Annual #1 everything it should be? I know not everyone reads the annuals to the series they collect. After reading this comic, I think I understand why. The annual universes are usually stand alone, but relevant. Wolverine Annual #1 in a continuation of Fantastic Four Annual #33 and Daredevil Annual #1. It’s an interesting way to tell a story across a broad cast of character’s titles. But, these are both series that I do not currently read. Is this an attempt to coax readers into picking up the other annuals? Most likely. Is it a tactic Marvel uses all too often? That’s up to you to decide, but I personally dislike it. 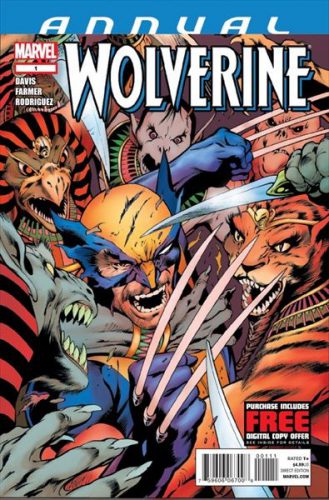 All of that aside, the book itself was alright. One thing that stuck out like a sore thumb was the abundance of characters from other story lines. I’m okay with it actually. I like getting to know some other characters I wouldn’t otherwise have the pleasure of spending time with. But, that bad taste of feeling like I need to read the other annuals to understand this one completely still lingers in my mouth of reading. It is following the story of ClanDestine. Maybe you’ve heard of them. If not, you’re in the same boat with me, going on the same journey. Clan Destine is an other-worldly family of super-natural beings who, once born to our dimension, have been parading about as super hero types. They are an interesting lot, with an obvious amount of history. A history that this book attempts to get you invested in.

So, is it investing? Sure it is, it does what it should. If you don’t know ClanDestine, you should know they once had a brother who was killed. This particular brother was immensely powerful, able to time travel and such. In here we see his “return” as a spirit who possesses a robot (see Daredevil annual #1) and wreaks havoc on a museum in New York City. This is an apparent attempt to grab the attention of his supposed family. But one of the members of the Clan, Kay, or Jasmine Cuckoo (does this mean mother of the Cuckoos?) has her doubts as to whether this is truly Vincent. After she convinces Logan to help her, they are drawn into a warped reality, created by the mysterious entity. A reality where Vincent’s intentions with Wolverine are made clear. Oh, and Doctor Strange shows up, for no real reason, and really doesn’t contribute much at all. It’s an epic story with an astounding battle. But is the story all that memorable?

Alan Davis both scripted and penciled Wolvie Annual #1, and really did a good job with it. He seems to understand the character of Logan, where other writers have been wavering. Here he is the hard ass he is supposed to be. As for the other characters, I really don’t know enough about them to say if they’re accurately portrayed or not. But I like them, for the most part. The story itself though was nothing to get overly excited about. An all too familiar theme with the Wolverine series right now.

Davis’ art is well done, and the inks by Mark Farmer and colors by Javier Rodriguez are adequate. I actually appreciate their collaboration better than that of the current Wolverine run. Everything is clear and concise, no real quarrels here. The art is really well handled and professional on all parts.

Wolverine Annual #1 was a good read, but I wouldn’t say it profoundly impacted my life. It was another random Wolverine story that leaned heavily on the events of some other annuals. Did it make me want to seek out more on ClanDestine? Not really. I read enough comics as it is, I don’t need to go seeking out stories I will probably never continue. But all in all, if you’re reading Wolverine, there is no reason not to read this book.