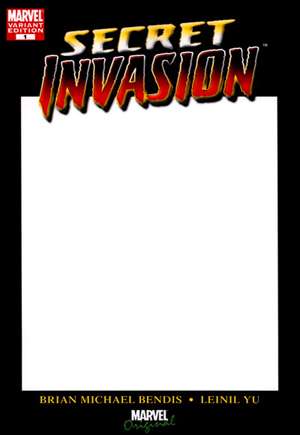 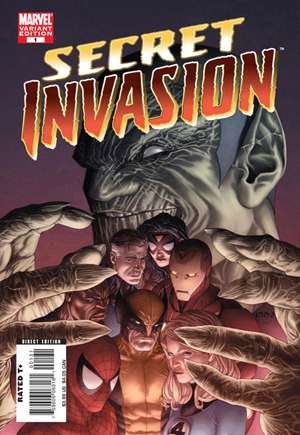 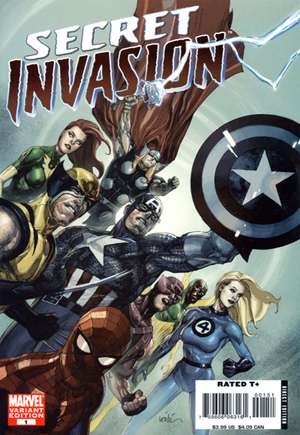 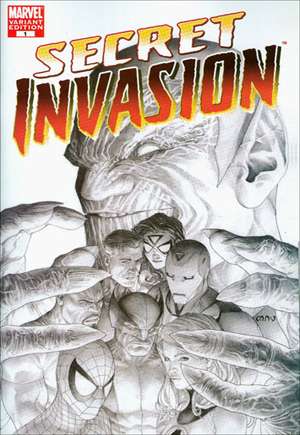 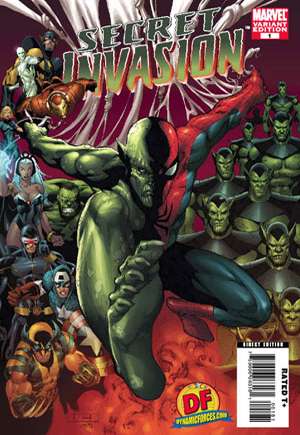 Secret Invasion kicks off years in the past on what appears to be the Skrull homeworld, a shadowy group of Skrulls beginning the plot that is now taking form as the Secret Invasion. Back in the present, Iron Man shows Mr. Fantastic and Henry Pym the Elektra Skrull to figure out exactly how they are able to avoid detection by any of earth’s heroes. Meanwhile on the S.W.O.R.D. command ship, Dum Dum Dugan is meeting with Agent Brand when a Skrull ship is spotting crashing to Earth. At Avengers Tower, Spider-Woman learns of the ship from Iron Man, then calls to tell Luke Cage and the New Avengers about it while Jarvis looks on in disapproval.

Luke calls on an old friend (Cloak) to drop them on top of Avengers Tower to steal one of Iron Man’s planes to quickly reach the crash site in the Savage Land. Tony and the Mighty Avengers show up minutes later and takes up pursuit. When they reach the Savage Land and find the wreckage, the Mighty Avengers show up to arrest them, but at that moment the first strikes of the Secret Invasion are made. Dum Dum Dugan blows up the S.W.O.R.D. command ship and Jarvis downloads a virus that runs through every piece of Stark technology on Earth (and in space), both reciting the line “He loves you…” as they unleash these attacks.

Tony immediately begins to seize when the virus hits him, as all of his satellites, prisons and other facilities shut down. Elsewhere, the Thunderbolts are attacked by Captain Marvel, who was confirmed to be a Skrull operative, though he decided to go against his brethren and fight for the good guys, so it was a bit confusing why exactly he did this. At the Baxter Building, someone from a tour group switches from a normal person to Sue Storm and implodes the entire building, sending it to the Negative Zone. Back in the Savage Land, both Avengers teams continue to argue about the situation when from the wreckage emerges over a dozen Marvel heroes (in their 70’s outfits), claiming themselves to be the real thing and not understanding who the real heroes are.

Out in space, Agent Brand and her crew are trapped in gelatenous bubbles that provide them air, but that will run out in ten minutes time. That is the least of their concern however, as an entire Skrull armada is now en route to Earth. Back in the lab with the Elektra Skrull, Mr. Fantastic believes he has learned how the Skrulls have avoided detection. Pym admits he does too, then proceeds to use some sort of matter disruptor to blow Mr. Fantastic apart and leave him hanging about the room like silly putty. Pym reverts to his true Skrull form, stating “He even loves you.”

Wow, when Bendis said he would come out swinging, he wasn’t exaggerating. Three reveals in the first issue alone and nothing short of huge players in the Marvel Universe. Dugan, Jarvis and Pym.. those are some big mainstays! Overall I really enjoyed this. It definitely sets up just how seriously the Skrulls are taking this, sending people to infiltrate, then immediately following up with their entire armada. I loved th subtle reference to how out of the loop Skrulls have been by having all the imposters in the 70’s outfits, since the Skrulls really haven’t been a player in the MU since the Kree-Skrull war. This is definitely going to be a fun series. I also liked the riff on New Avengers #1 with the cover art. The interior art is good, but Yu sometimes can’t hit the females quite right. He likes bold chins, which just don’t work on women. Check out Emma Frost in the 70’s heroes spread. Totally looks like a man.

Note: Cover score is based on the normal shipping cover only.

Alan Scott is Gay: From the “News That Isn’t Really… First of all, some of my best friends are gay. Not really. If I look at those whom I consider…