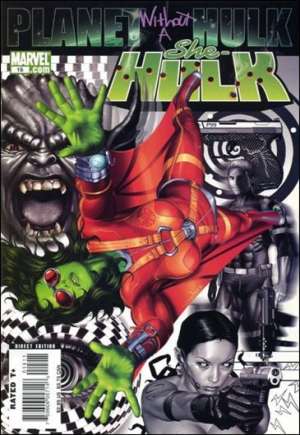 Note: I think this issue takes place after Civil War is done, but I can’t be sure.

She-Hulk is now an agent of S.H.I.E.L.D. on their Hulkbuster unit. Every time she gets a job, she hopes that it is actually her cousin that she needs to bring down, because she is still not aware (as most aren’t), that the Illuminati sent him into space. Her task this issue is to take down The Abomination, who is currently residing in Reno, gloating that without the Hulk around (the villains at least have noticed he’s gone), that he is now the strongest one on the planet.

She glides down and engages him in battle, using her strength as She-Hulk and her brains as Jennifer Walters to get an edge on him. She also tries to get under his skin, but this only makes him more angry and strong. Seeing that she is losing her edge, she calls up Doc Samson for some help. He explains that Gamma-people’s forms tend to reflect their feelings. Seeing as the Abomination is “hideous” he must feel that he is un-lovable, so Jen mocks him, saying her hitting him is the closest a woman would ever want to come to touching him. That hits where it counts, giving Jen enough time to take him down.

Afterward, Clay Quartermain learns that she is now seperated from John Jameson, and they end up sleeping together. Jen knows she can have whatever she wants as She-Hulk, but lately she doesn’t feel very good about it…

This is a much better approach to this character than the last few story arcs. The whole “space drama” thing they had going was kind of fun and interesting, but looking back, I didn’t like it much. I’m glad she didn’t stay with Man-Wolf, but turning her into a slut isn’t the right path either. I’m hoping at the end of all this she finds out what happened to her cousin and goes into space to find him, that would be sweet.

The Fangirl Concern: Betty Ross – Why Fans Should Go… If you feel like you need a strong female character fix every week, and struggle to wait until the end…

Dear Marvel Comics – Like, Ew! Totally gross! I went to the comic book store today. I saw some great "jumping on" books. Incredible Hulk #1 and X-Men…