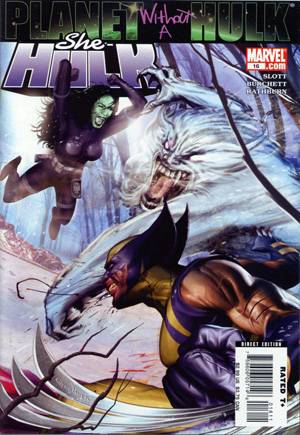 In the Canadian wilderness, the Wendigo is loose and looking for his next meal, when he spots a lone camper in a clearing. Luckily, not only was he being followed by Wolverine (on a tip from an Indian friend), but also by S.H.I.E.L.D., who used a disguised She-Hulk to lure the Wendigo. Outside the containment zone, Wolverine’s contact has shown up: Elizabeth Twoyoungmen (Talisman’s daughter, aka Talsman II) has show up to aid Wolverine and cure the Wendigo, but S.H.I.E.L.D. simply wants to capture the beast.

Back in the fight, She-Hulk makes a lude joke about Wolverine’s bones being laced with adamantium (which doesn’t even make sense, because the penis isn’t a bone), earning her a slash to the stomach from Wendigo. She halucinates her human form talking to her, telling her she is messing up their life, but in this moment she is fine because of her healing factor in She-Hulk form.

Elsewhere, Malorie Book is going on a date with the Two-Gun Kid. He takes her to see a Midsummer Night’s Dream, which has a part where someone was tricked into falling in love with a donkey, which reminds her of her time with Awesome Andy, so they leave the play early. On their way home, an old woman recognizes Malorie from a tabloid that has a picture of her kissing Andy. This is the reason all her client’s have been firing her lately.

Back at the fight, Wolverine decides the only way to stop the Wendigo is to inflict massive damage (since he too has a healing factor), so he has She-Hulk throw him in a “Fastball Special” and blows a hole straight through him, taking his heart out on the way. S.H.I.E.L.D. contains the beast and takes him into custody for what they are apparently calling “Project: Achilles.”

I didn’t like Slott’s portrayal of Wolverine at all. He used too many exclamation points. Wolvie is supposed to be calm and cool all the time, not exclaiming simple statements. Aside from that a pretty good issue. He is still trying to keep some of the ‘soap opera’ feel to it with the Malorie/Two-Gun thing, while at the same time getting back into Marvel continuity by rounding up all the Hulk’s villains, which I am assuming means they are preparing in case he is ever returned to Earth. Now that Tony is director of S.H.I.E.L.D. (after the events of Civil War), he knows what they did to Hulk and will no doubt prepare for it backfiring on them.

Cool cover by Horn, but his “action” She-Hulk looks kind of funky. He might want to stick to “sexy” She-Hulk.