It’s an interesting debate, should superheroes hold down a job where their presence puts coworkers at risk because of their extracurricular altruistic activities? You could also argue whether or not superheroes should have a wife, for the same reason. But, generally the wife knows who the alter ego of the superhero is and makes the choice to be with them, coworkers don’t have that option.

How many times has the Daily Planet or Daily Bugle been attacked just because Superman and Spider-Man work there, respectively? Is it fair for the coworkers of heroes to be put in danger because they unknowingly work alongside a metahuman? Now I definitely don’t want to say supers shouldn’t have jobs, because then the only option they’d have to make money would be to rob a bank. But, if a villain discovers his secret identity, if he’s a real bad guy, he won’t have any qualms about attacking the hero in his place of work. This puts normal folk in jeopardy because of a conflict they don’t fully understand. 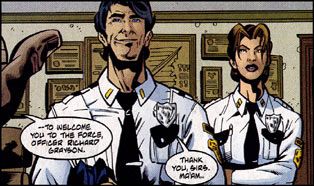 Now there are certain jobs that heroes have had that don’t put anyone else in danger. Kyle Rayner, for instance, was a freelance artist. The only contact he had with a coworker would be an editor who told him what they wanted him to do, and whoever he turned his work into. Peter Parker was also a freelance photographer(what else can you freelance?) who only dealt with the Bugle whenever he turned photos in.

Conversely, Parker was also a high school teacher, which given the amount enmity he’s engendered from his villains over the years it’s seems extremely risky to teach children. In the same vein, when Jefferson Pierce worked as Secretary of Education for Lex Luthor when Luthor was president, wouldn’t that be dangerous for the POTUS? Sure, Luthor is a bad guy but if a villain is pants crapingly insane, they aren’t going to worry about reprisals. Nightwing served as a police offier during his time in Blüdhaven, and while cops are a better prepared to deal with a supervillain threat, it does put unnecessary risk on them.

So what jobs would allow heroes to make a living without endangering innocent lives? Well, anything you can freelance seems to be a good idea. Maybe a graveyard shift security guard post at a graveyard. How about some sort of phone sales from their home. Seriously though, for the amount of heroes that have normal jobs, attacks on their workplaces don’t seem to occur very often. And if they do happen, the superhero working there is well equipped to deal with it. And as far as working from home goes, if you want to argue that they put people in harm’s way by working with them, then they shouldn’t live in an apartment building or in a neighborhood, unless their neighbors happen to be other heroes.

Outside of living off the government dole, either welfare or being paid (à la the registration act from Civil War). Options for jobs that don’t put fellow employees are a bit limited. What’s your opinion on heroes job placement? Should they be working around unpowered people despite the risk? Are there any jobs they could take that could support them without risking innocents? Leave it in the comments.

Top 5 Jobs for Superheroes Awhile ago I wrote about whether or not superheroes should have day jobs. If you are interested, you can check…

Why Don’t Superheroes Build the Prisons? We have all seen it time and time again. Superhero stops villain after they commit a crime, villain is tried…

Should Villains Be Killed? It's a moral quandary heroes wrestle with. Is killing a villain right if it is to save lives? Some heroes…