It’s a moral quandary heroes wrestle with. Is killing a villain right if it is to save lives? Some heroes abide by a strict code and a line they won’t cross. But, in recent years that line has been blurred. You still have some heroes that won’t cross that line, but more and more are crossing it in an attempt to prevent future atrocities. And if a hero doesn’t kill a villain if they have the chance, are the future crimes of said bad guy partly the fault of the superhero who couldn’t pull the proverbial, and sometimes literal, trigger?

Villains are bad guys, that’s why they do what they do. Whether they’re psychotic, greedy, manipulative, or whatever negative affliction they suffer from. But, there are degrees to villainy. The Shocker, for instance, just wants to make money. The Joker, on the other hand, is a downright psychotic individual who has fun butchering innocents. In the grand scheme of things, Shocker is fairly harmless, while the Joker is a prime candidate for forced euthanasia. I think it’s important to discuss the difference between killing someone and murdering someone. Murder is premeditated and done willingly. Killing is usually done in defense of oneself or others and is not taken lightly. 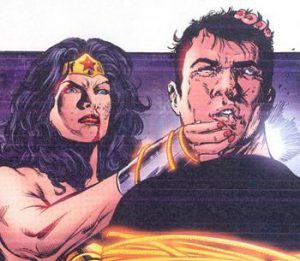 Cops can use deadly force in situations that call for it, is there ever a situation like that for a superhero? If the only way to stop a villain from murdering civilians, would be to kill him, shouldn’t the heroes be given a pass for it? Wonder Woman caught a lot of flak for killing Maxwell Lord, granted the general public didn’t know she did it to stop him from keeping Superman under his control. But, in that case, the only way to release Superman from Lord’s mind control was to kill him. When Cyclops reformed X-Force he did it as a preventative measure, to eliminate threats to mutantkind before they could do damage.

One concern heroes would have about killing an enemy would be escalation. It can be a slippery slope, once they start killing villains, where do they stop? Sure, they can take out bad guys like Joker, Norman Osborn, or Lex Luthor, but after they’ve taken care of the worse of the worst do they move on to the Hydro-Men and Sportsmasters of the universe? Batman himself is worried that if he finally does snap and take out one of his rogues gallery, he won’t be able to stop.

Another area of concern would be the issue of human morality dictating law. For instance, the Green Lantern Corps is now able to kill threats to the overall good of the Corps. If a Green Lantern were to kill a villain, should they be subjected to the laws of Earth? They are bound to a higher authority than the laws of man. Or how about, the Spectre? He is the embodiment of God’s wrath, and kills murderers and rapists, but should he be judged by a jury?

Let me know what you think. Is killing a villain ever justified in comics? If it is, what are the situations and circumstances require? If it isn’t explain why not.

Should Superheroes Have Day Jobs? It's an interesting debate, should superheroes hold down a job where their presence puts coworkers at risk because of their…

Review: Green Lantern – New Guardians #7 New Guardians has been one of the more interesting titles I've been reading. Bringing together representatives of all the various…