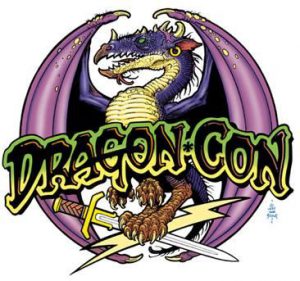 As a sort of disclaimer, I’d never been to a con of any sort prior to DragonCon. As it was my first con, I was both excited and nervous. I was excited because it’s a con, duh. The nervousness was due mostly to not knowing what to expect, and also potentially having the image of certain creators that I’d built up in my mind be not so great in person. Luckily, DragonCon was so much better than I expected. I shall attempt to regale you with my story of my days spent there in downtown Atlanta, GA, on Labor Day Weekend.

To start off, I made a trip from the Gulf Coast of Mississippi up to Jacksonville, AL, to a friend’s house who was going to DragonCon with me. As DragonCon began Friday, my original intention was to arrive at my friend Michael’s house on Thursday, stay there for the night, and then we all leave the next morning. Hurricane Isaac’s approach made that plan change fast. I got there a few days earlier than expected, revisited the not so illustrious sites in Jacksonville, and then when Friday arrived we loaded up and headed out.

On the entire hour-and-a-half trip to Atlanta, we were planning our point of attack for DragonCon. We decided to hit Comic and Pop Art Alley, as DragonCon calls their Artist Alley, before we saw any other parts of the con. So, right after registration and picking up our badges with art by Humberto Ramos, we headed over to the Hyatt Hotel to check out the various artists and their wares.

As I was something of Twitter friends with the people behind indie comics over at Naughty Bicycle, I hit their table first. Josh Dykstra and Kate Carleton were super cool and I was loving Kate’s art, so I got her to do a commission for me, that of Gus from Sweet Tooth, which turned out wonderfully. I also picked up the first issue of Josh and Kate’s “Facebeast“. I then walked around the area, checking out other tables. Over the course of the next couple of days and various trips back to Artist Alley, I picked up several things. I got a DC Captain Marvel commission from Bryan Mon and picked up the first issue of his comic “The Adventures of Tuff-Girl“. I chatted with Andre Frattino about his graphic novel “The Reaper of St. George Street” and got him to sign my copy and even got a sketch of me on the inside! I got a super cool Ultimates print from Sunny Lee, picked up a sketchbook from Matt Frank, and got another Sweet Tooth sketch from Matt. From the awesome Sam Flegal I picked up a Zombie Captain Marvel print. If you can’t tell by this point, Captain Marvel is my favorite superhero and Gus from Sweet Tooth is one of my favorite comic characters. 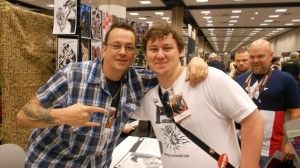 In addition to all my random commission and print purchases, I also got a few things signed and met a few creators. The biggest one for me, I think, was getting Jim Starlin to sign my Infinity Gauntlet trade and talking to him for a bit. I got in his line early and ended up being the second person he signed for that weekend! I also picked up a trade of Breed and got Mr. Starlin’s signature on that as well. Since George Perez was also there, I got his signature on the Infinity Gauntlet trade as well, which was awesome. I also got Perez to sign my copy of JLA/Avengers #3. I got Kevin Eastman to sign a couple of TMNT comics for me, and talked with him for a minute as well. I also met Bob Burden and bought a Flaming Carrot trade from him that he was kind enough to sign and sketch in for me.

Though I spent a lot of time in Artist Alley meeting different creators, both big and small, I did manage to make my way over to the vendors one day. Though there seemed to be a lot more vendors catering to the fantasy/sci-fi crowd, there were still quite a few comics to be looked through. I picked up a few back issues that I had been looking for, particularly a couple of issues of Green Wake and Cowboy Ninja Viking, before I left that part of the con.

Next to Artist Alley was a legitimate art gallery. They had tons of paintings from a slew of different artists, some I recognized and some I didn’t. Most was fantasy based, but there was some that wasn’t. As I wondered around the area looking at the paintings, I noticed a few that seemed a bit familiar. It was only after looking at them closer that I realized that they were the art for cards from the Magic: The Gathering card game. As someone who’s played off and on since he was eight, it was a treat to meet some of the guys behind the art on cards that filled my childhood. Talking to Todd Lockwood and Mark Zug was one of the highlights of my trip.

As far as panels went, I was able to get a front row seat to the Jim Starlin panel where he talked about this early work in comics and his career since. He talked about the creation of some of his favorite characters, Thanos in particular, and how drugs may have had just a little to do with some of his storylines. I also sat in on a panel titled “Communications in a Post-Apocalyptic World” which was lots of fun and talked about ham radio primarily. A George Perez panel rounded out the list, and it also was a great time.

There was, of course, cosplay everywhere. I saw several guys dressed up as Misty from Pokemon, which is just as bad as it sounds. There were also plenty of Banes, Batmans, Supermans, and Jokers. Some of the anime cosplay was lost on me, but, all in all, the cosplay helped add a lot of fun to the whole thing.

All in all, DragonCon was AMAZING. I don’t think I’ve ever been surrounded by that much nerdy awesomeness before, and I can’t wait to do it again. It was everything I could’ve wanted out of a first con, and I really hope to be able to go back in the years to come. It really may just have to become a yearly thing, if I make sure I have the money every year. Getting to meet so many talented people and talk to them about something we’re both in love with was an absolute joy. As an indie comics lover, getting to purchase the books straight from the source was a great experience. If you live anywhere remotely around Atlanta, check out DragonCon next year. It will definitely be worth your while.

SMC Correspondent Report: Tricon 2012 I'm going to preface this report by saying that I had never been to a comic con before. Needless to…

Crossover Classic: The Infinity Gauntlet The End Begins Here! Thanos, the Mad Titan, he who is in love with Death (literally, not figuratively) has gained…