Who here has ever been to a comicon? I’ve always felt excluded from the con going crowd because of my Midwestern place of residence and distance from any of the major cons you frequently hear about. My brother and I had finally had enough, so we jumped in the car and made the six hour round trip to Planet Comicon in Overland Park, Kansas (just outside of Kansas City) this past Sunday!

My first impression was great! We were welcomed in by the fine lads at Flying Fortress Comics, who were gracious enough to let me in under their vendor pass! This allowed me a little more “in” with the rest of the talent stationed around the matrix of tables as I was often asked who I was with. Not only did this allow for some easy conversation, but it unwittingly had me dropping the Flying Fortress name around the Con all the while putting StashMyComics out there as much as I could! 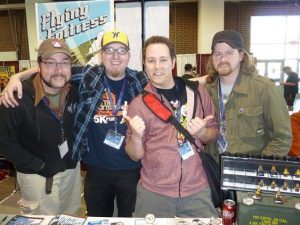 After the initial gab with the Flying Fortress fellas, I didn’t quite know what to do with myself. Remember, this was a first for me, so my brain was all “kid in a candy store” crazy! Do I dig through the endless boxes of comic book deals stationed at every corner and crevice, or do I try to get my handful of books signed and meet some more talent? Well, I never really gained any organization to my adventure and opted to take the ADD route. Basically, whatever was in my proximity, I went for! Here’s some of the highlights:

Eh? Deer Crossing signs? Yes, you heard right! We just think that it would make the trip more enjoyable if there were silhouette pictures of deer in various human poses, such as; in a recliner smoking a cigar, pushing a stroller, in cars hitting other deer, etc. Maybe we’re crazy, but I think there’s money in that! Back to Planet Comicon… 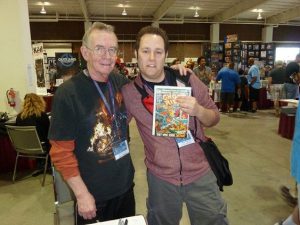 My visit with Gary Friedrich was most interesting. Somehow I didn’t notice his name on the original list of guests, so I was giddy when I spotted him. Gary has to be one of the nicest fellas I’ve ever met. He was genuinely appreciative of my adoration and even allowed me to take my picture with him! I asked him some about the legal issues he has dealt with recently, and he appeared to have a winning attitude about it all. In the end he said it was all fine as long as he could pay the bills, but that he thought it would have been a lot easier on all if Marvel had just paid him the money they spent on their lawyer! I’m sure even half of that would have sufficed in some degree. Mr. Friedrich’s son-in-law was also there giving his support. I asked what it was like when he found out he would be related to the guy who created Ghost Rider. He said he was actually a really big fan of Ghost Rider even before meeting his wife, and that his habit of wearing Ghost Rider memorabilia was what brought him into the fold!

I realized after this first venture, it’s probably important to go prepared. I knew there were a few books in my collection that I would enjoy signed, but I neglected to prepare for the other things I could take advantage of! Here’s a few things I learned:

Well, there you have it! Planet Comicon 2012 from my personal perspective. Overall, a good time to be had. I hope to see this con grow over the years. There was definitely no lack of attendees! Special thanks again to Flying Fortress Comics for taking me under their wing, and being so dang cool. I look forward to seeing more of them at Free Comic Book Day! 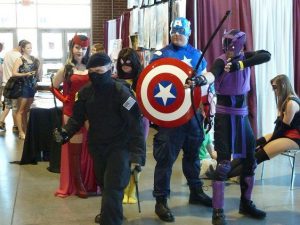