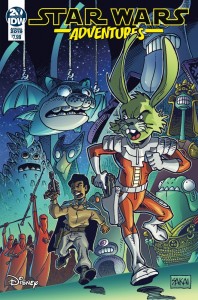 Some weeks there’s just so much great stuff coming out that you can’t put in into just one review. That’s why we have Family Comic Friday Extra! This week, meet a forgotten character from a galaxy far, far away in our look at Star Wars Adventures Annual 2019!

2019 has seen the return of the original Star Wars universe! Earlier this year, Marvel released Star Wars #108, wrapping up several long-lost story lines from the first ever Star Wars comic book series. That issue brought about the return of a few characters that many fans never thought that they’d ever get to see again.

One thing I have to say about Disney– they listen to their customers. Star Wars #108 was such a big hit, the over-sized issue went into a second print. The cyborg bounty Hunter, Valance was so well received, he’s back in the pages of the new Marvel miniseries Target: Vader.

Valance isn’t the only character seeing a return to action. In this giant-sized annual, the ever-so-suave Lando Calrissian is joined by a character so controversial, he’s considered the Jar-Jar Binks of the original Star Wars trilogy. I’m taking about Jaxxon!