It’s that time again. Where all the comic sites around the web cast their opinions on what was the best of the best for the past year. While that’s lovely, we at StashMyComics are also interested in what comic book pros have to say about their favorites. So, we asked a few esteemed creators to pick their #1 single comic issue out of the thousands published this year. From Jeremy Whitley, writer/creator of Princeless, to Brian Winkeler, co-creator and writer of Monkeybrain’s Knuckleheads, we’ve got you covered! 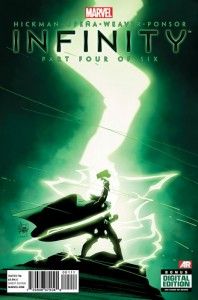 “The answer to this is a big surprise, even to me.  It’s been a year where I’ve read a lot of amazing creator owned books and many of them surely rank well up here.  Every issue of Sex Criminals and Saga has been amazing.  The first issue of Pretty Deadly and Velvet are high finishers.  The last issue of the Wake blew my mind and the last issue of Captain Marvel made me shed a few tears.

But as much as I looked through the other issues I loved this year, the answer became very apparent.  My favorite single issue of a comic this year was an issue of a giant event comic written by one of the most talked about comic writers in recent memory.
Infinity #4 did something to me that is really uncommon.  A lot of comics make me laugh and a lot (honestly) make me cry.  I invest really easily.  But rarely do I find myself wanting to stand up and cheer.  And just a few months ago when Thor said
“And are there other free men and women here as well?  Those who would stand and be counted?  Those who would fight until they fall or are victorious?  Then call them out…there is battle waiting for the righteous.”

I nearly lost it!  There are few things comics are better at than the rallying cry, be it “Avengers, Assemble!” or “To me my X-Men” or “For Asgard!” or “Spoon!”.  That scene, that moment, is what superhero comics are all about.  In an Avengers run that introduced a good dozen new characters, Thor was the stand out.  And it was perfect.”

-You can follow Whitley on Twitter @jrome58 or visit his webpage. Be sure to check out his upcoming issue of My Little Pony: Friends Forever! 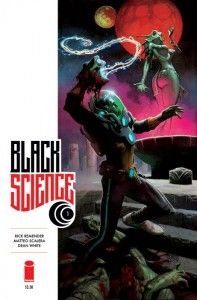 Ryan Lee – Artist of the webcomic The Naturals

“Ok, I know it’s a little late in the year, and seems like a cop out since it’s new…but Black Science #1 was the tops for me. That’s what I want out of comics. Inventive ideas, amazing character designs and environments, intrigue and high stakes…and DROOLWORTHY art. Remender is a genius and this book is going to be vault him into legendary status. This is the kind of a book I’d LOVE to draw.”

“With most books on this list, I think it’s going to be first issues of new series or relaunches of previous properties or the like, but my favorite issue of 2013 was Sweet Tooth #40, from way back in January. #40 was the last issue of the series, serving as something of an epilogue to Jeff Lemire’s post-apocalyptic epic that followed Gus, a small, antlered boy all alone in the world, and Jepperd, the big, scary man who would come to care for and protect him. While most final issues make you wish for another arc or a continuation of the series simply so you can see the story continue, Sweet Tooth ended near perfectly. Lemire showed the reader how the world would be once Gus and the other hybrids were left alone, but also brought together the various themes of love/hate, brothers, fathers/sons, and more in a final issue that left you not just satisfied with how things ended, but feeling that it shouldn’t end any other way. Lemire had spent years expertly writing and drawing the story, and it payed off in a perfect way. It was because of that that Sweet Tooth #40 lasted all year as my favorite issue, from 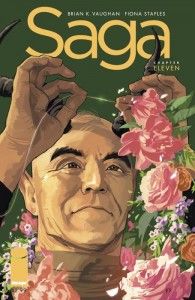 “For my favorite single issue of 2013, I would have to choose Saga, issue 11.  I remember sitting in a coffee and pie shop, amazed at the character development and personalities unfolding in the pages.  Brian K. Vaughan and Fiona Staples are in peak form here, giving us a beautifully intimate character development through the book, and ending it with an emotional sucker punch. Vaughan’s dialogue is sharp and realistic, and matches each character’s voice perfectly.  Meanwhile, Staples deftly catches every subtle expression, blending cartooning and realism in a way that’s natural and fresh.  I love comics that are fantastical, especially when they say something so universally true about the world we live in.  No matter where you’re from or what you believe, Saga has something that speaks to everybody.”

-Follow Daniel on Twitter @danielwarrenart. Daniel will have artwork in the upcoming series EVE: True Stories from Dark Horse! 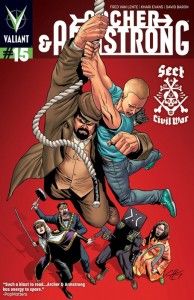 “I have a hard time picking a favorite anything, be it a movie, beer or in this case single issue of a comic book. I was flipping through Netflix, and saw that they added a movie I really liked, “Le fabuleux destin d’Amélie Poulain,” and it suddenly hit me why I love this movie: it makes me happy when I watch it. And that brings me back to my favorite issue of the past year. My Amélie issue this year was Valiant’s Archer and Armstrong (vol 2) #15. In this issue we join the immortal Aram (aka Armstrong) and his long-lost, equally immortal, brother Ivar on a pub crawl through history to sample some of the best beers ever made. Aram is hung up on the loss of his former friend and partner Archer, and Ivar, the wise older brother is trying to snap him out of his funk. The issue brings together witty dialog, science, time travel, brothers, kitties and craft beer. All of the things that make me happy.”

Wes Locher – Writer of the comics Chambers and Innovation 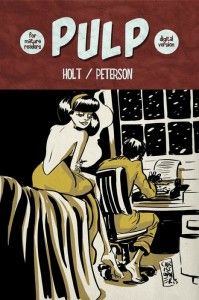 “I enjoy a little unpredictability in my comics which is exactly what Jeremy Holt and Chris Peterson delivered with their self-published 22-page one-shot, Pulp. This book…it came out of nowhere, completely knocked me on my rear, and it didn’t apologize for it. Pulp is exactly what the name suggests: it’s rough, it’s lurid and it’s executed amazingly well.

We spend 22 pages learning about author John Merchant, who’s working on a new novel while also working through some serious issues. What’s the difference between reality and the reality we create for ourselves? Here are your answers. Oh, yeah – and there’s a twist in this book that will have you clapping your hands and squealing with child-like glee. Maybe that was just me. Whatever. I’m not too proud to admit it.

Pulp the only issue I read this year that as soon as I finished it, I flipped back to page one and started over. I’ve read the majority of Holt’s other work, and this one-shot is the product of a writer who was firing on all cylinders and he clearly enjoyed every keystroke. Peterson’s art is fluid, perfectly stylized and he nails the tone of a surreal world that’s much darker than it first appears.  Buy this book just to see the lettering. It’s that cool.

Holt and Peterson decided to sell their book electronically at GumRoad using a ‘pay what you want’ model. Go pick it up, and please, pay a lot.” 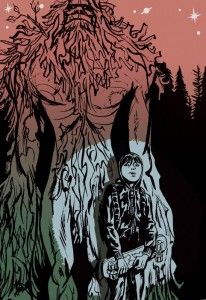 “Nothing comes close to my choice for this year’s favorite issue. Admittedly, I’m cheating a little, but it’s on a minor technicality. Outliers was successfully crowdfunded and distributed to it’s backers in 2012. However, it wasn’t brought to the masses until August 2013 from Alternative Comics, where it sold out in a flash. I wish everyone could still get a physical copy because the packaging on this puppy is the best thing I’ve seen EVER. Tsu, the book’s main character is mute, yet Johnson is masterful in his ability to fascinate and intrigue the reader by Tsu’s connection with all the mysterious goings-on around him, including what appears to be a friendly big foot. Artwork wise? Masterful. Few are the times I’ve felt story and art meshed so well together, and this is one of those times. READ THIS BOOK.”

-Chip is on Twitter @ChipReece, or follow the Metaphase fanpage to watch for the Kickstarter launch of the full graphic novel!

Pick: The Legend of Ricky Thunder – Written and drawn by Kyle Starks

“I attended my first HeroesCon this year and it was as great as I’d heard. I hung out with industry friends, met some inspirations (like Evan Dorkin) and bought a ton of stuff from super talented independent creators who thrive at creator-focused cons like this.

And from that ton of gold emerged one majestic eagle soaring above the rest: Kyle Starks’ ‘The Legend of Ricky Thunder.’

I’ll admit I don’t follow wrestling and barely followed it during the “Hulk” Hogan heyday of my youth in the early ‘80s, but this book is more than just the story of the greatest wrestler in the world. It’s an unholy and awesome amalgamation of Regular Show, Mike Judge and Jeffrey Brown’s ‘Bighead.’ And I don’t even know if Kyle is influenced by any of that stuff. All I know is that it’s a hilarious and original creation from a cartoonist with a distinct and confident voice. I bought everything Kyle was selling that weekend and I can’t wait to buy more.”

-Follow Brian on Twitter @brianwinkeler. Brian is also the author of Bastard Road, which has two issues in the Harvey nominated Popgun Volume 4!