StashMyComics.com: How long have you been involved in comic books Joe?

Joe Badon: I started by self-publishing a comic about 3 years ago.  It was a comic entitled “Behind Yesterday” and about a year and a half ago I went full time as a freelanceillustrator and writer working on comics, children’s books, storyboards, etc.  I’ve worked with many small indie publishers and creators such as Red Leaf Comics, Silber Media and Krazybov.

SMC:What motivated you to self-publish a web comic?

JB: Well, at first, I sent my comic off to a few publishers (you know, the usual, Image, Top Shelf, etc…)  and then I realized what a pain in the butt it was to even get a publisher to notice you amid the thousands of other creators clamoring for their attention. And then I realized that self-publishing would be a fantastic learning experience about the technical and business side of comics.  One thing you learn is that if you want to succeed in any aspiration then you want to have a good understanding of every aspect of that aspiration.  It’s good to first hand experience with all aspects of comics, from penciling and inking to printing and publishing. 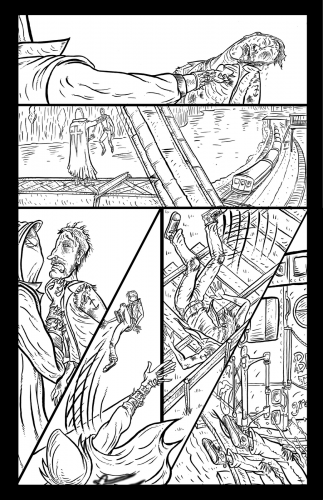 SMC: I admire your devotion and perseverance! But before being published you must have an idea you feel is strong. So how do you go about developing an idea? Are you an intuitive creator or would you say you are more calculated and deliberate in your approach?

JB: One of the very first things that I do, after I get a story idea is:  I tell my wife the idea.  She’s my sounding board.  If she doesn’t like the idea, or if I don’t get a good reaction off of her then the idea usually dies in the water.

It’s good to have someone to bounce your ideas off of.  Find someone who has very similar taste and similar interests.  Don’t go telling your idea to everyone you meet because (like the old saying goes)  everyone’s a critic and not everyone has good taste.  There another old saying that says:  “Opinions are like trash cans, everyone has one and most of them stink!”  This is especially true when sharing creative and artistic things with people.  With any art form: Beauty is in the eyeof the beholder.

My wife has the same creative “eye” as me so I strongly trust her opinion. If my wife likes the idea then I take some time to “daydream” about the idea.  I close my eyes and imagine a world, people and stories, problems and solutions. Then, out of that, a story will solidify and I will write a story outline and go from there.

SMC: “Behind every good man there’s an even better woman”. Noe, you mention your creative and personal artistic taste. How would you describe it for folks who may not have read your comics yet?

JB: As far as creative writing goes, I’m most influenced by The Twilight Zone.  If I’m ever in need of a creative spark then I’ll watch a couple episodes and it’ll inspire me to really think out of the box and do something new and different.  So much of what we see and read is rehashed, warmed over crap.  Twilight Zone stokes my creative juices.  One thing is true though, Ecclesiastes declares “There’s nothing new under the sun.” and writers have to remember this.  I see a lot of people never create anything because they never feel like they have an original idea when the truth is that there is no truly original art. All I can do is take all of my influences, mix them together, and create something new out of those influences.

So, having said all that, my other creative influences are directors like David Lynch, Wes Anderson, Jared Hess, Michael Grondy, Sam Raimi.  I really enjoyed Art Speigelman’s Maus.  Recently I’ve really been inspired by the comic books “Omega, the Unknown”, “Ferro City” and “The Escapists”.

SMC: Reading your list of influences you strike me as the type of creator who has an interest in the power of comics as a medium. In your opinion, what strengths does the comics medium have which other media lack?

JB: I have heard comics are called the “poor man’s movie making”  but it’s far more than that.  Comics are the perfect medium that mixes visuals and prose.  Far better than picture books, such as children’s books, where the visuals and the words can feel disconnected from one another.  And with film, there’s is no real way to take everything in at your own pace.  With comics, you can linger on a panel or a moment for as long as you need.  A friend of mine pointed out that you can fast forward, rewind and pause without that disjointed feeling that you get if you do that with a movie.  It truly lets you soak in the experience without feeling assaulted like you would in a theater.  And with strictly prose, such as a novel or poem, the imagination is allowed to convolute the writer’s vision where with a comic, the creator is able to present a concise visual to it’s audience and still be able to paint a deeper picture with prose inside of the visual context. 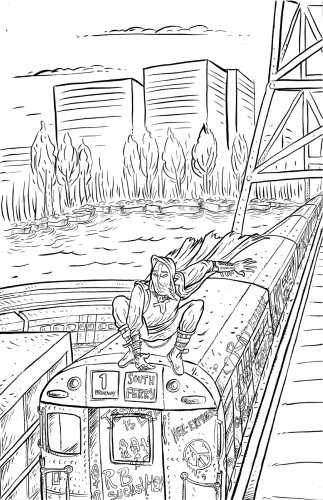 SMC: Agreed! Rewinding is one of my favorite things about comic books. Also, on camera a person pretty much always look like a person and a tree like a tree, but art in comic books can be much more stylized and evocative! Speaking of, how would you describe your art/illustration style to those unfamiliar to it?

JB: A lot of people seem to compare my stuff to R. Crumb.  That’s usually what I hear. But I feel my art is a little more accessible than Crumb’s.  I would say that if you took R. Crumb, Paul Pope, Geoff Darrow and a little kid with a broken crayon, put them in a blender and served it to a fanboy who immediately got ill after drinking it then that would be the closest description to my work.

SMC: That’s quite a milkshake! Can you tell us a little bit about Behind Yesterday? The concept, characters and where folks can find it?

JB: Yeah!  You can download the pdf version of issue #1 for free over at DriveThru Comics. Here’s the link:

Since doing freelance work, I have been able to refine my style.  I have a few new projects that have been or are about to be published.  did the artwork for a mini-comic for Silber Media entitled “Built”.  For Built, I did a super naive, super sketchy style.

In August, the comic adaptation for the independent film “The Casimir Effect” is coming out through Flying Tiger Comics.  I did the pencils, colors and textures for this one.  Artist Leigh Walls did fantastic inks for it.  For this, I tried to emulate Kody Chamberlain with plenty of layers, ink splats and textures. I wrote a short story for Red Leaf Comics entitled “A Stranger at the Door”.  The art is by Alberto Pessoa.  It’s a 50’s Twilight Zone type of story.  It’s being published in Red Leaf Comic’s “Sky Watcher” #2 within a couple months. Also, I did the artwork for “Gone” coming out through Amish Drive-by Presents. There are quite a few other projects that are still underway.

SMC: Thank you Joe! Thank you so much for coming to StashMyComics.com. We wish you all the best in those upcoming projects! Before we finish is there anything you would like to add?

JB: Yeah!  To all the indie creators out there:  Work hard. Work your butt off and don’t quit.  And things will start happening for you! Thanks!

Check out the homepage for a Joe Badon giveaway.

Diving In – a newcomer’s perspective on comics By guest writer and Stash My Comics user Kenny Yeager. I'm going to hazard a guess about you, my dear…