The writers, bloggers and admins of StashMyComics have united for an end of year extravaganza! Everyone has picked a favorite single issue from this past year, and not a one is the same! 2012 has seen the coming of Marvel NOW!, the cancelling and new starts for a handful of DC’s New 52, and some strong creator owned books out of the Image Comics stable. You’re going to find a few that you’ve probably considered your own favorites, but I guarantee a few of our choices may surprise you. We’re all making a case for why we think the issues of our choosing deserve the status of “Best Comic of 2012!” Now let the fun begin! 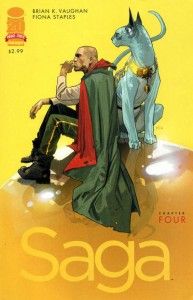 Like my Longbox Graveyard blog, I am normally stuck in the year 1978, but for 2012 I made an exception for Brian K. Vaughn’s and Fiona Staple’s Saga. I don’t know what I expected from this title, but this isn’t what I expected. I could pick any issue from this what-the-Hell-is-happening series for my favorite of 2012, but Issue #4 rises to the top of the stack because … it wasn’t what I expected. The pleasure planet Sextillion? Marko’s first marriage? The slave girl? The insight we get on bounty hunter The Will’s moral compass? Not what I expected. This whole issue — this whole series — is not what I expected, but I expect I will continue to read it into 2013 and beyond. Besides, this book gives me instant geek cred with mousy girls behind the register at every comic shop in the nation. Reading Saga ensures I am not what THEY expected, either! (To which Lying Cat says … “Lying.”) 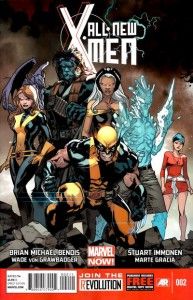 You get the impression that Brian Bendis is getting to do with All-New X-Men what he wanted to do with Secret Invasion but never got to do: introduce classic versions of Marvel characters to their modern-day counterparts so they can ask them, “What the hell happened to us?!” Whether the scribe lost his nerve way-back-when or Marvel editorial shot him down (“No, Brian, Iron Man was NOT a Skrull”), All-New X-Men gives Bendis his mulligan and here in issue two he shows why it was worth it. The X-Men have been put through bigger and badder meat grinders than any of Marvel’s other characters over the decades, even Spider-Man, and it’s a joy to watch the Silver-Age era original five X-Men A.) try to figure out exactly what it is their grown-up versions think they’re doing, B.) act quickly and decisively and as a TEAM (something the X-Men haven’t seemed to be in quite some time), and C.) take down Wolverine, of all mutants, with impressive efficiency. Twice. (Anyone else perversely interested in the Logan/Teen Jean/Teen Scott/Emma/Scott love pentagon this whole mess implies? Me neither.) Add the exemplary visual story-telling skills and clean lines of Stuart Immonen’s art to BMB’s out-there concept, and you have a “where on Earth is THIS going?” winner. I’m on board.

My entry for comic of the year is Winter Soldier #10. First off, I have to say that this is an outstanding series overall and I found it very difficult to choose just a single issue. I chose issue #10 because it adds a level of emotion to the series. One of the last few pages of the issue depicts a flashback of Bucky and Natasha strolling the streets of Paris. It’s a simple, yet beautiful way to show the relationship between the two characters, which is the heart of the series. 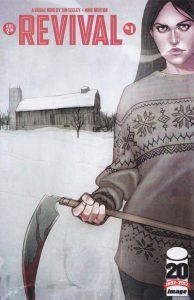 The reason I chose Revival #1 wasn’t only because of what that issue had, but what each consecutive issue has turned the series into. Revival #1 was a rather slow paced comic, but it served a few very important purposes. Tim Seeley introduced readers to the situation first, then slowly introduced us to the core characters their motives and relationships to each other.

The quality of workmanship in the writing of this issue was solid, but the entire concept of the series is certainly noteworthy. A small town under quarantine for multiple occurrences of the dead coming back to life, but not in a zombie sense. These people were coming back exactly as they were, for the most part. The only difference was that they were technically still dead, but they simply regenerate like Wolverine. Seeley made sure to really set this series apart from other zombie series by throwing one more mysterious attribute in, the alien-like creature roaming around the forest looking for a baby.

The first issue was slow paced, as I said, but the excitement was ramped up in the last few pages with a gruesome gore scene, perfectly executed by artist Mike Norton, ending with a plot changing bomb. What Seeley set up in this issue was extraordinary, especially after you look at how far the series has come in five issues. Each issue has been a bit more intense and faster paced than the last, each until number five has introduced more key characters while still paying close attention to the core three or four. No matter what each issue since #1 has done, though, it was #1 that was a sure sell for me to add this series to my pull list, which I usually wait two or three issues to do. 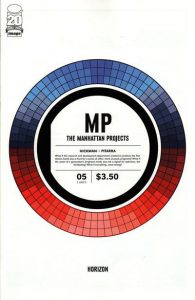 What do you get when you base a comic around the government research program that produced the atomic bomb, and crank the insanity up to 1000 by introducing a drunk Einstein, robot arms, schizophrenic geniuses, aliens, Masonic presidents, and FDR as an A.I.? The short answer: The Manhattan Projects by Jonathan Hickman and Nick Pitarra. With issue 5, we see the full insanity of the series with the men of The Manhattan Projects embarking on their biggest journey yet. We’re treated to a man eating an alien, using an irradiated skull as a weapon, genocide, man’s first trip to another planet, and much, much more. This issue has all the best pieces of the series: ominous foreshadowing, ridiculous situations, aliens, exploding aliens, melting aliens, irradiated skulls, mad scientists. Still there’s just enough history to make you realize that these people really existed on Earth…just in much more mundane forms. That is if being some of the greatest scientific minds of the last century can be considered mundane.

Don’t let the title fool you. My favorite has little to do with everyone’s favorite four green ninjas. It’s all about their friend Casey Jones, the hot headed street fighter with a hockey mask. This particular issue struck a chord with me, but not because he has a sweet fight scene with an onslaught of Foot Soldiers or a mutant alien slug. I LOVED this issue because of how real it is. As a social worker, I’ve come across many a heart wrenching situation and very few of those have been “simple.” Mike Costa and Ben Epstein do a spot on job of communicating the complicated nature of abuse, and remind us it’s not as simple as walking away. Jones is more than capable of defending himself, but he still lets his dad beat him to a pulp. That decision goes back to promising his mom on her death bed that he’d let his dad “feel strong.” Whoa. Aside from the abuse issue, this is probably the deepest character development Casey Jones has ever had.

Not what most people would expect for a “Best of the Year” issue, and that’s a good assumption. This issue won’t win any awards, but when it was released, it was a great read. During all the Avengers vs. X-Men hoopla, it was nice to take a break from that and just read a fun story. It centers around Doop. Who is Doop you ask, and why is he a member of the Jean Grey School’s teaching staff? This issue explains it all. The humor in this issue made for a great change of pace for what was happening in the X-Universe at the time. While it may not be the “best” issue, it was my favorite issue this year.

If you’re keeping score, Image and Marvel have tied with three favorites each. However, if you count the TMNT issue I think it’s clear that the independents have taken the prize! So what do you think of our choices? Did we get it right? What comic books do you think deserve to be the best of 2012? Be sure to share your thoughts in the comments below! Here’s to looking forward to 2013 and another great year of comic books!