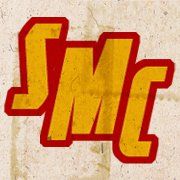 It was a long time coming, but we’ve finally made it! Here we are, at the crème del la crème! We’ve made it to the final stretch! We’re in sight of the big kahuna! It’s the StashmyComics Top 25 List: Heroes!, and we’re looking at those that were super enough to make it to our top 5! Was it Bloodshot, Green Lantern or Wonder Woman? No! Could it have been Optimus Prime, Judge Dredd, or Wolverine? C’mon! How about, Daredevil, Nick Fury, or Iron Man? Forget about it! These top 5 appear to be the most obvious of choices, but they’re obvious because that’s where they belong.

These 5 heroes, in every sense of the word, have earned their spots. There were tough choices to be made, but in the end, these five had to be here. Most are the first that come to mind when you even think of a comic book hero. Nearly all of these are symbols of their respective companies, but even more than that, they are symbols themselves to the heroes they fight alongside. From the tough choices they have to make, to the witty banter in the face of death dealing danger, SMC welcomes you to the end of our heroes list. We give you our top 5. 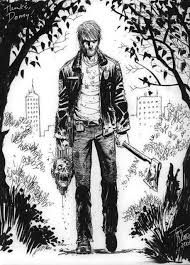 Shocker, right? You’d have never thought a character like Rick would even be mentioned on this list, let alone be in the top 5. Let’s break it down: Rick Grimes was a deputy nearly right up to the zombie apocalypse that has devastated his world. Taking a bullet during a firefight that put him into a coma, Rick fortunately missed the start of what would become the standard in his world. When he woke, not only was he alone, but also in a world that at any given moment could be come highly deadly. Throughout the course of Rick’s life since the zombies, he’s had to not only fight his way though the worst of the undead, but also the living. He’s had the make sacrifices and choices that nobody should have to make: His best friend Shane, losing his head to the Governor, fighting for, and keeping the prison, and eventually losing his wife and newborn daughter. Through all of this, Rick has become a leader, a survivor, and even more, a hero. He is strong-willed, and through everything this world has thrown and taken away from him, Rick presses on, not only for himself, but for the lives and safety of those that choose to follow him. It’s not a role he wants, but it’s a role he has to take. Rick Grimes has definitely earned his spot at #5. 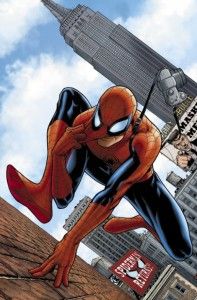 These famous words that we all can recite by heart define this character, but heroes at their core: “With great power, comes great responsibility.” Stan Lee could not have come up with a better line to not only define a character, but to define the entire genre of heroes as well. We all know the story. Peter Parker, nerdy kid gets bitten by a radioactive spider while at a science fair. Not only does it give him the powers of a spider, it also gives Peter a chance to be where he’s never been before. He’s on top, but only for a short time. A hard lesson has to be taught to Peter Parker, and it’s something he’ll never forget. With his Uncle Ben’s death, Peter took to the streets, never looking back. With his witty banter, spider-sense, and just all around coolness, Spider-Man has become one of the most popular characters in printed history. Villains hate him, J.J. Jameson trashes him with the Daily Bugle at every turn, half the citizens of New York think of him as a menace, but still he presses on. Though a street-level hero by trade, Spidey has fought alongside the greats in the largest of battles protecting mankind and the planet. A major player in Civil War, House of M, Siege, Infinity Gauntlet, and so much more, his deeds speak for themselves. Underneath it all, though, is that young man who lost his uncle. He still suffers for it, and probably will until he’s finished as a hero, but it’s what keeps him going. The Amazing Spider-Man is spectacular as he swings his way into our #4 spot! Woohoo! 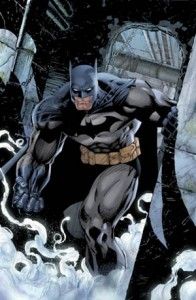 The Caped Crusader. The World’s Greatest Detective. The Dark Knight. Batman, above all other characters on this list, use their suffering to fuel his thirst for vengeance against crime. It was crime that took his parents away, and it’s crime that has festered in the city he calls home. By day, he is playboy Bruce Wayne, owner of Wayne Enterprises and the most sought after bachelor in the DC Universe. That’s only a front though. By night, Bruce is who he really is, Batman, masked vigilante that is the self-proclaimed protector of the citizens of Gotham City. Batman is unlike nearly every other hero on this list, where, like Rorschach, he walks that fine line on the edge of being a hero, to falling into the endless void of villain. His moral code keeps him in check, which completely prevents him from killing, something that other heroes in the DC, and other universes, have taken note of, and has also earned Batman their respect. Batman is hard, brutal, persistent, and merciless when it comes to, not only the likes of Joker, Riddler, Killer Croc and more, but to street-level criminals as well. Underneath it all, though, is that young boy who longs for his parents, and if he can prevent just one murder like the one that changed his life forever, then he’s doing it right. From the greats of Bob Kane, Frank Miller, Jeph Loeb, and Jim Lee, to current scribes Scott Snyder and Greg Capullo, Batman takes his place proudly at #3. 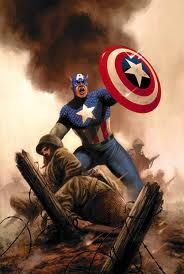 When it came down to who would take our #’s 2 and 1 spots, it was probably the hardest choice I as a writer have had to make. I think Cap would be honored, though, to take our #2 spot. It’s not that he’s any less of a hero, on the contrary, Superman once said that Captain America was more of an inspiration to the men and women that fight along side heroes than he was. I mean, just look at him. Proud. Honored. Respected. Captain America is the visual, and whole-hearted imbodyment of what it means to be a hero. When he fought alongside the Howling Commandos in WWII, sacrificing himself for his men, being frozen in the Artic until years later, when many more like him walked the earth. Joining the Avengers, he not only became a symbol for America once again, but for freedom and justice as a whole, and also for everyone he helped to defend. From fighting the Red Skull, Crossbones, HYDRA, and his best friend Iron Man during Civil War, Captain America has stood up for his honor and values above all else. We salute you, Captain America, as we proudly give you our #2 spot on our list of heroes. You’ve earned it, soldier! 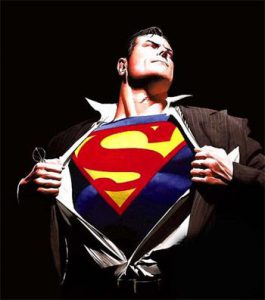 I think was pretty obvious as the list went along, but could you honestly see anyone else here? I couldn’t. When it came down to it, the only hero that could grace our #1 spot had to be the one that started it all. Superman is the last surviving member of his race of people. Coming from the doomed planet Krypton, Kal-El crash-landed in the fields of Smallville, Kansas, where he was found, and raised by two of the most gentle people on earth. Becoming a member of the Kent family, Kal was given the name Clark, and the rest is history. His deeds are countless, his heroism nearly unmatched, his passion for truth, justice, and the American way are ingrained into the character. He is as self-sacrificing as any other on this list, if not more so. Without a doubt the most recognized character in comics history, Superman just makes you feel proud. Everyone has their favorite character, and Supes isn’t always on that list ,but you have to at least give a nod of respect to the guy. We all know his theme song (you’ve probably hummed it already since reading this), and we’ve all tied that towel or sheet around or necks, put our arms out as far as they can go, and flew. He is our hero. He is our symbol of protection. He is Superman.

That does it, folks! We’ve come to the end of our list. Did we leave some heroes out? Let us know in the comments! Don’t be shy! We’ll be coming at you with more top 25 lists soon enough, with villains, teams, events in comics, and so much more! Keep an eye out, and we at SMC hope you enjoyed our list of the Top 25 Heroes!