Welcome to The Dollar Box, a new monthly column here at StashMyComics. I am Paul O’Connor, author of the weekly Longbox Graveyard blog, and I’m obsessed with old comic books! Here at The Dollar Box, I’ll be looking at single issues or short runs of comics where the cover price is a dollar or less.

I already extolled the virtues of Strange Tales while reviewing the classic Stan Lee/Steve Ditko run of Doctor Strange at Longbox Graveyard, but that literally told only half the story. Strange Tales was a two-character book in those days, and it was a happy problem to have when the Doctor Strange backup feature outshined the headlining Human Torch. Rather than promote their Sorcerer Supreme to top billing, Marvel moved to bolster the book by introducing Nick Fury, Agent of S.H.I.E.L.D., as the lead feature in Strange Tales #135. 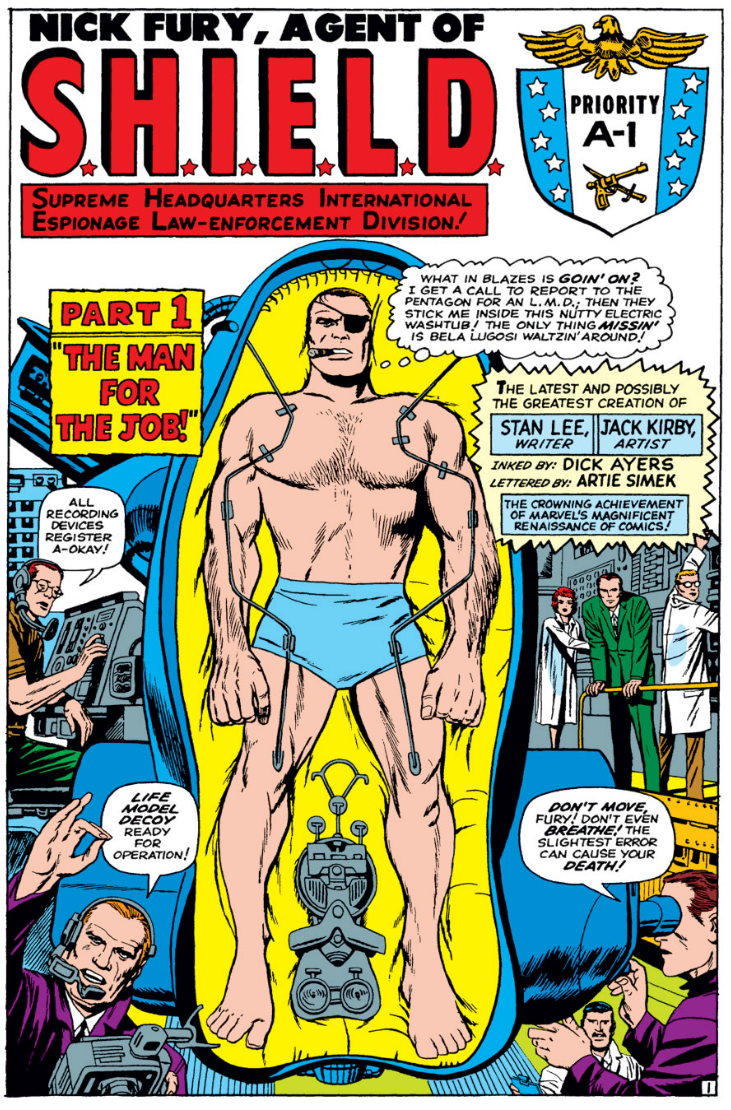 Marvel was never one to miss a trend, and with Bondmania stirring up superspy excitement around the world, it was only natural that The House of Ideas come up with their own secret agent man. To lead their answer to U.N.C.L.E., Marvel recruited Sgt. Nick Fury (late of the Howling Commandos) promoted him to Colonel, and dropped him in the deep end of running the Supreme Headquarters, International Espionage, Law-enforcement Division.

One of the things that makes this story sing is its brevity. Checking in at a taut twelve pages, there’s no room for exposition — like the best James Bond movies, the action is fast-paced and a little weird, racing from one exciting set piece to another before the audience can register how unlikely everything is. In “The Man For The Job”, a bewildered Nick Fury doesn’t have time to extinguish his stogie before he’s stripped down to his skivvies and installed in a Life Model Decoy Master Mold, on a timetable so tight that Fury’s artificial body doubles start to get knocked off by the bad guys before Fury is even informed that he’s been mechanically cloned.

One page later, and Fury is getting napalmed in his Porsche; a page after that and the Porsche has folded up her wheels and taken off into the sky.

And the page after that, we’re introduced to the masters behind all this mayhem, as HYDRA makes it’s first Marvel Universe appearance. I love HYDRA — they’re the perfect supervillain goon squad, clad in their cultish baggy uniforms, and seeming to welcome casualties just so they can break out their signature phrase — “Cut off a limb, and two shall take it’s place! HAIL HYDRA!” 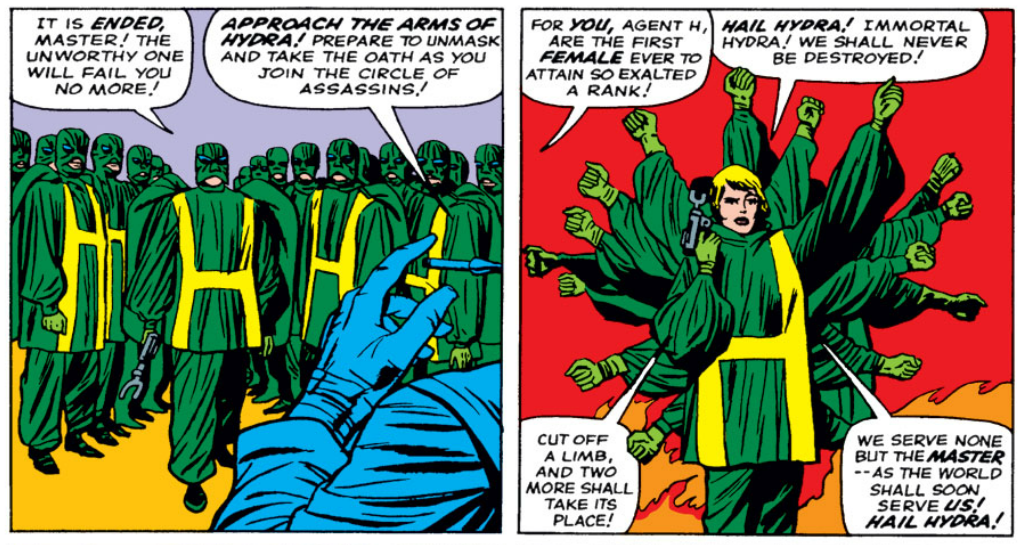 No sooner has HYDRA completed their pajama party than we are back with Fury in the secret base of S.H.I.E.L.D., where Nick tries to resist getting dragooned into running the operation, claiming he’s still a sergeant at heart, and way out of his league… until his battle-honed instincts detect a hidden HYDRA bomb, which Fury throws out the window of the headquarters, sparking one of the greatest reveals in Marvel Comics history. 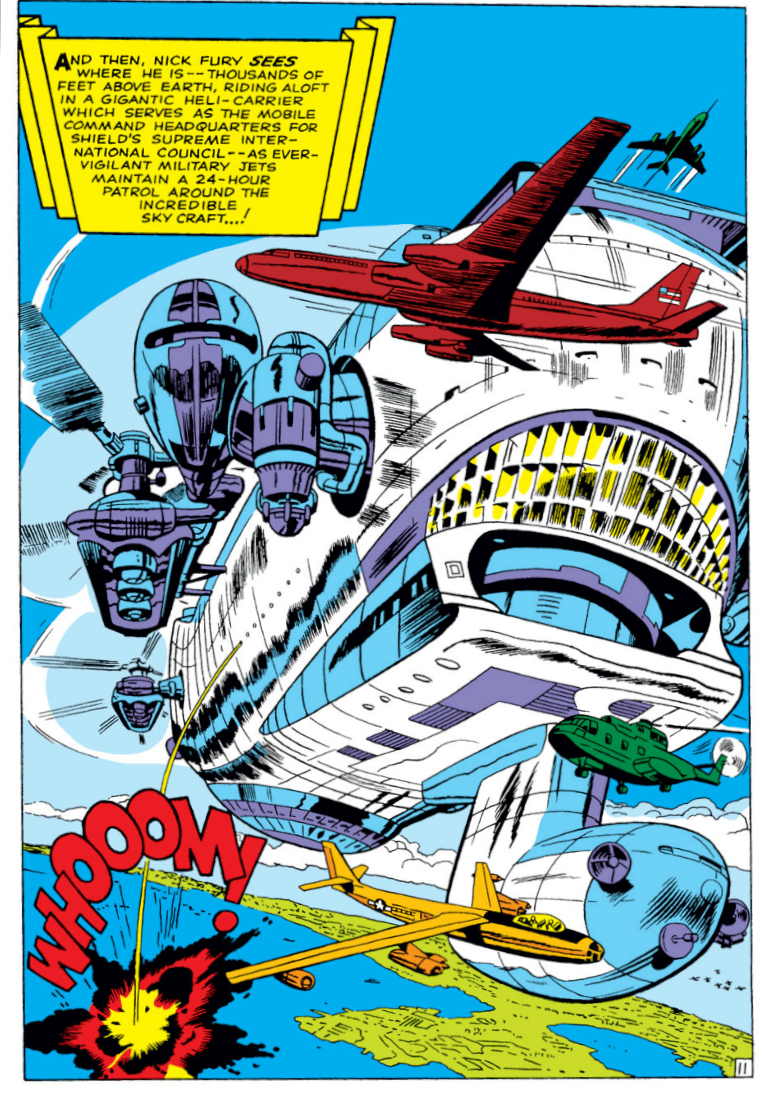 So there you go… in twelve pages, Stan Lee and (especially) Jack Kirby blow our minds at least five times, create the S.H.I.E.L.D. Helicarrier, give birth to not one but TWO super-secret spy organizations, and introduce a character that half a century later is still prowling the Marvel Universe, now a big-screen movie hero played by Samuel L. Jackson. 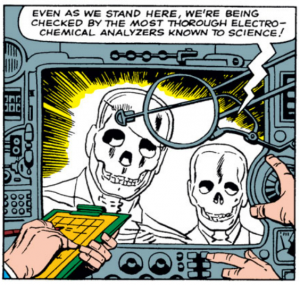 And King Kirby pre-imagines the Transport Safety Administration, too!

Not a bad day at the office. And a great single-issue story!

The cruel irony of The Dollar Box is that you will never find these issues in a real “dollar box,” provided such a thing even exists any more. Nope, these classics will cost you a lot more than a buck (and if you do find one for a dollar, be sure to buy it and mail it to me — I’m good for that dollar, I swear!). With a cover price of twelve cents, a near mint copy of Strange Tales #135 can run two hundred dollars or more! If you want to read this fine tale, you can hunt up a back issue, read a reprint, or check out a digital copy as part of a Marvel Digital Comics Unlimited Subscription.

Thanks to StashMyComics for making The Dollar Box a reality! I’ll be back the first Wednesday of each month with another comic book treasure from the past, and in the meantime, please visit me at Longbox Graveyard for a new post every Wednesday, featuring retro reviews and pop culture revelations from a world where it’s always 1978!