There are no words if someone hasn’t heard of Fearless Defenders yet. Oh, wait there is, “Pre-order it now!”

At least, that is the call from writer of the series Cullen Bunn. The Marvel word-smith has taken to his social media accounts to call on people to pre-order the book before it’s February release date. On his Tumblr account, Bunn asks people to post and tweet out, “I asked my comic book retailer to order THE FEARLESS DEFENDERS! You should too! Please RT #fearlessdefenders” going so far as to hold a contest. Posters of the tweet between now at December 24th will have their named entered for the drawing of a 12-issue Fear Itself: The Fearless limited series autographed set. (He is also running another twitter promotion for his Sixth Gun series.) 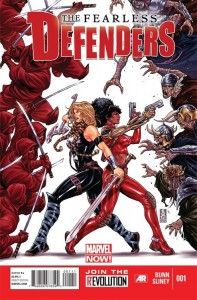 Why is this series a “Fangirl Concern?” Perhaps, because the series will not highlight, one of two female superheroes, but ten dames of danger. That’s right ten!

Excitement has spread over the news that Valkyrie, Misty Knight, Dani Moonstar are getting their time in the Marvel NOW! spotlight with this series. However, I think some other information has been lost in the excitement in the sheer number of female characters that will be featured in the team book. Bunn said in his promotional blog post that, “…a team of seven other awesome (and unrevealed) female characters will be embarking on some of the most wild superhero adventures artist Will Sliney and I can dream up!” While I’m excited about Misty’s return to center stage, I’m more curious about the fact that Marvel will now have the largest female team ensemble cast of any comic book, come February. And, while these other characters have been unrevealed does that mean they’re brand new or just being kept secret?

In the meantime, I asked Bunn over Twitter about this new promotional push, if it was of his own accord or from Marvel. Bunn said, “I’m doing whatever I can on my own to promote it.”  It highlights the importance pre-orders are having on the industry right now.

My Little Pony: Friendship is Magic #1 shocked everyone, even fans like myself, with its massive pre-order numbers earlier this year of 90,000. AvX and Uncanny Avengers also set records as well as raised eyebrows with their high pre-order sales. Along with the Walking Dead #100 records from this past summer, a books success is not just measured by its final sales figures, but by initial interest.

That’s why pre-orders are a “Fangirl Concern.”

I’ve made it very clear in other outlets that I love female centered books. They’re harder to find and do not last as long as other series, for various reasons that do not need to be debated at this time (trust me, it’s coming.) So, if pre-order numbers for Fearless Defenders fall flat, the book, no matter how good, could suffer an ill fate straight out of the gate.

Let’s be clear, if the book does not read well, has poor chemistry or generally is not working I would not advocate continuing to buy it,  just because the characters are female. However, waiting to read it to hear from someone else if it is good or not could guillotine the book. A book which looks to have such exciting potential and a broad female cast of characters.

At the very least you can pre-order it, send out a tweet and possibly win free comics.