A few weeks ago I called upon the sales figures of Batgirl as a rally cry for Gail Simone and her unnecessarily harsh firing from the series. Fortunately, that had a rather quick, abrupt, yet positive end.

Now, I wish I could just bury my head in the sand, when it comes to sales. That’s because one of the greatest female books available right now is in danger, due to low sales: Captain Marvel. In December of 2012, Captain Marvel came in at 103, with only 19,970 units. Now, let’s face it, except for the top five books, sales figures weren’t too hot for many high quality books last month.

However, right after these figures came out the talk began about Captain Marvel‘s fate. Comic gossip sites have latched onto this news as well. 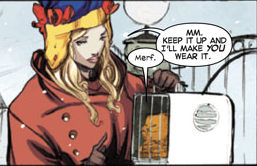 A fan can drone on about how these numbers do not take into account the digital sales figures, friends borrowing copies to read, and illegal downloads (the latter two not making any money for Marvel, therefore not making the property worth it.) Also, keep in mind that Captain Marvel was just named in Marvel’s own list of “Our Favorite Heroes of 2012.” So, perhaps the cancellation rumors are just that, rumors.

For the sake of argument, let’s say they’re not and there are bigger issues at play. “Bigger issue, than sales? Jessica, where are you going with this?” Just give me a second.

The first problem is an old one in the Marvel camp. Some books are given extremely creative and talented writers who come up with wild and fantastic stories that gain loyal fans. Kelly Sue Deconnick has done this with Captain Marvel, especially with female readers. Carol Danvers, as a

character, was never just cheesecake. Unfortunately, between the ridiculous costume, and disproportionate body, she was often betrayed that way. In Deconnick’s Danvers you have the strong fighter pilot hero in focus. She’s still beautiful and strong, but reasonably dressed in a stand out uniform (thank you Jamie McKelvie) with mysterious story-lines. You would think this would lead to a great selling book. However, one of the first complaints from issue one was the muddy and dark artwork. I have to admit, I kind of liked it at first. It was different. Then the scenes taking place in the night time hit the page and I was a little turned off too. I persevered and kept on reading, because to me the character was worth more than the art. Unfortunately, many people stopped reading between issues 2-3. The sad part is, art teams have switched in and out since then. Currently, Captain Marvel‘s style is more modern, artsy with clearer colors, although less defined lines. Here are some unlettered preview pages from Captain Marvel #10, to be released on February 20, 2013.

This was also the style for issue #9. This second style I am absolutely in love with. It’s not for everyone. Plus, the original art team is set to cycle back into the series soon. If the art is a major factor of what is turning people away from the book, then they are doing a great disservice to a wonderful character.

The second problem I call “Missed Marketing Mayhem.” Since the creation of the Carol Danvers Captain Marvel, female readers especially, have been going crazy, looking for a way to show their “Carol Corps” pride. “Carol Corps” is the name that Deconnick gave the flood of fans that were talking to her about Danvers’ Captain Marvel via social media. Instead of waiting for Marvel to release merchandise that might never be made, they began to get creative on their own: dog tags, t-shirts, sweaters, ID Cards (you can see mine here,) knit caps, gloves & scarfs, earrings, dolls, necklaces… you name it, it’s been made. While it is not uncommon for the comic reading community to get crafty, the rate at which the Carol Corps has “activated” this merchandising network is amazing. It’s a marketing and money making outlet that Marvel consistently misses out on and under-utilizes. Don’t start railing about merchandising being a complex system that can be a financial blunder if too much is made and not enough is sold. Even Tim Gunn wasquoted recently commenting on Captain Marvel’s great uniform design (once again, that was McKelvie.) 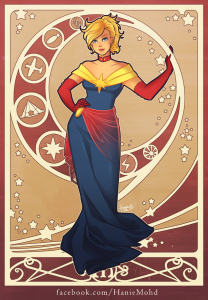 So a strong female that both female and male readers can relate to: check.

Artwork that requires a very specific aesthetic and turns many readers off: perhaps this is the biggest hurdle that needs to be crossed. If this is what has been keeping you from reading Captain Marvel, it may be time to give it a second (or in the case of many of you a FIRST) try. Don’t worry about catching up, start with issue #9, and then issue #10. Lately, I’ve been an advocate for not buying a book, just for the sake of supporting it. However, this book has solid story and characters behind it. The main ingredients are there for a wonderful book. It would be a shame to see it end before the publisher gave it the attention it deserves.