Last week, the suspicion that Marvel’s XX teaser banners were hinting at an all female team were confirmed.

What was even more exciting was that the banner meant that Brian Wood would be leading this all female team on the classic flagship book of X-Men. Now, there was one thing immediately obvious with the announcement that the book’s team would be Storm, Psylocke, Phoenix, Jubilee, Kitty Pryde, Rachel Grey, and Rogue: the author is not a female.

Before you scroll down to the comments section and start sounding off your opinion, stay with me for a moment.

I honestly have no problem with this book’s author. Brian Wood has shown himself to be a very sensible, centered and logical writer of female 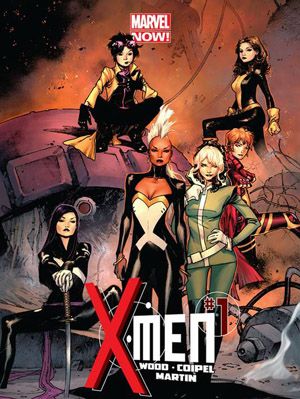 characters. Just within the last month Wood has created female characters that are both powerful and interesting with Mara, in the same titled book, and Leia in the new Star Wars title. Wood has also shown that he can highlight female characters well with books like DMZ.

Despite this, there has still been talk about the fact that an all female book should be in the control of a female writer. This type of opinion is to be expected, however it hasn’t been women sounding off, but male readers. From comic book forums to pod-casters, it is men who seem to be voicing the opinion that a female writer or a writer/artist team should have been chosen for this book.

As far as female opinions are about Brian Wood’s ability to pull off this book, I’m comfortable in knowing I’m not alone in this opinion.

However, I do wonder why male readers are voicing this opinion. Are they hedging bets in fear that female readers will sound off? Do they really believe that because Brian Wood is male he will not be able to write only for females? Is it because the main storyline revolves around a chosen baby, which could dangerously lead to stereotypes that, while positive, still put female characters in a box?

Wood has said in multiple interviews that he is looking to write these characters as humans first, perhaps that is the key to whether or not the title will be successful.

What do you think? Did Marvel miss an opportunity or will Brian Wood continue to shine with X-Men? Let me know in the comments below.

The Fangirl Concern: Being fearless about Bunn’s… There are no words if someone hasn't heard of Fearless Defenders yet. Oh, wait there is, "Pre-order it now!" At…

The Fangirl Concern: Gail Simone Off of Batgirl Writers are fluid in the big two comic publishers. That is as bankable as the fan outrage that will pour…