Over these next 4 weeks, we are going to fill up your geek energy meter with the long awaited StashMyComics list of top 25 heroes! We’ve compiled an extensive list from friends, Twitter, Facebook , and on our forums of who you think should be on this list. It was long, it was grueling, it was painful, but the list had to be made, and cuts needed to take place!

First, let’s take a look at what might make a hero. The definition from Webster’s Dictionary reads like this:

Hero: A person of distinguished valor, or enterprise in danger, or fortitude in suffering; a prominent or central personage in any remarkable action or event; hence, a great or illustrious person.

That definition, I think, sums up our comic book heroes of today. When you take the likes of Superman or Captain America, and mix them with the likes of Punisher or even Batman, the lines of what some think a hero would be can get a little blurry. Should a hero only be able to defend the common interest or the greater good, and not blur that line to what’s become so popular now with the vigilante hero? Breaking laws as they see fit, but keeping well within their own moral code, so as not to take that last step over the line that would then make them a villain? That definition describes every character on this list. The likes of Spider-Man and Rorschach most definitely fall in line with fortitude in suffering. Isn’t that what drives them? Persons of distinguished valor would most certainly be Superman or Captain America, Optimus Prime, or even Storm. They all fall in line in one way or another, and it was with this definition that helped to mold this list.

The top 25 has been broken down into 5 segments, each showcasing ultimately who we think should start on our list of heroes, and who made it to the top. Love it or hate it, let us know what you think!

Enough rambling from me. Without further ado, I bring to you the StashMyComics Top 25 List: Heroes! This week, we start with #25 to #21. 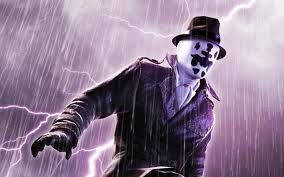 Who better to start our list off then that wonderful creation from Alan Moore and Dave Gibbons! Rorschach is what some would argue as the main protagonist in DC’s Watchmen, a 12 issue series that redefined the industry in accordance with comics and graphic novels. Rorschach is the last of the active heroes in a very tense 1985. Masked vigilantes have been banned from operating, but Rorschach remains. There is no middle ground with him: It’s either good or evil, and Rorcshach has made it very firm that he will target evil at it’s roots. He, out of all the characters on this list, walks that fine line the closest. The media already portrays him as a monster, a brutalizer, and very dangerous. For Rorschach, none of that matters. The only thing that matters to him is the eradication of evil from his streets, and he’ll do it by any means necessary.

A founding member of the X-Men, Jean Grey has earned her spot on SMC’s top 25 list. Her fight for mutant equality, the salvation of her species and the countless times she’s saved mankind, and let’s not forget her sacrifice as the Pheonix to spare the universe. A master telepath, seconded only to Proffessor X himself, Jean Grey not only fought alongside the likes of Cyclops, Storm, and Wolverine, but also helped to lead the team as well. Her dediation to what she believes in, and fights for is unparalleled, as is her spirit for ultimately what is right. All this, coupled with the fact that she kept one of the most powerful celestial entities in check, gives her plenty of reason to take our #24 spot. 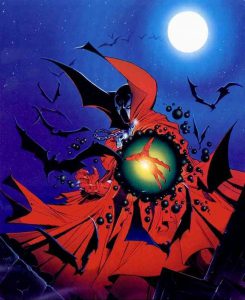 If any Spawn were to be chosen for SMC’s list, it would have to be Al Simmons. Trapped in this twisted but powerful body, Simmons has to live with the deal he had with Malbolgia on a nightly basis. He suffers for the loss of his wife, Wanda, the fact that he couldn’t provide what she needed most, a child, and that his best friend is the man who now provides for her. Malbolgia held up his end of the bargin, and now it’s time to collect. Simmons will have none of this! He was lied too, cheated, and now it’s time to fight back! He ends up protecting the only thing he really has left… the homeless that eventually cling to him as their savior. Simmons is good at heart, but with everything from his past life constantly gnawing at him, along with nearly anyone else who wants to make a name for themselves, Simmons will stop at nothing to make sure Malbolgia fails in any of his attempts. 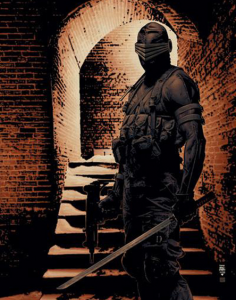 Without a doubt the most popular G.I. Joe, Snake-Eyes sneeks in like the ninja he is at our #22 spot. An American War Veteran, Snake-Eyes was severely wounded in combat, resulting in horrible disfiguration and the loss of his voice. Years later, Snake-Eyes trained alongside Storm Shadow in the Arashikage Ninja Clan. Snake-Eyes learned quickly, becoming the favorite of the Hard Master, Storm Shadow’s uncle. A rivalry quickly ensued, and one that lives on to this day. While Storm Shadow joined the likes of Cobra, Snake-Eyes joined ranks with G.I. Joe, the premiere counter-terrorist team. Fighting along side the likes of General Hawk, Duke, Scarlett, and Roadblock, he fights against terrorism and evil all over the world. Wherever Cobra strikes, G.I. Joe will be there, and so will Snake-Eyes, with sword and Uzi in hand. 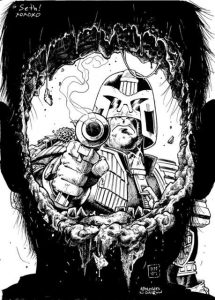 Dredd. The name alone makes criminals in Mega-City One wet their pants. He is judge, jury, and executioner. He is the law! One of two clones from Judge Fargo, the first Chief Judge, Dredd’s name was chosen specifically to instill fear in law breakers. Serving the streets for well over 50 years, Dredd keeps the streets of Mega-City One clean. His lawgiver, a pistol that is DNA coded specifically to him, and his Lawmaster, the kick-ass bike he rides on, help in Dredd’s never-ending quest to protect the innocents of his city. Commit a crime? Face the judge. Dredd is the law, and upholds the law, and may the books help you if you are deemed for execution! In a place like Mega-City One, street judges are a must, and Dredd is one of the best, if not THE best. That’s why he’s executed his way into our #21 spot.