If you follow the X-Men, or more specifically Wolverine, you have probably heard him utter the phrase, “I’m the best there is at what I do. But what I do best isn’t very nice.” That quote got me thinking, if Wolverine is the best he is what he does, what about the characters who are the worst at what they do?

So I racked my brain for characters that just utterly fail. While I could have just chosen 5 Spider-Man related characters (a thought that saddens me greatly), I wanted to broaden the scope and give everyone a chance to shine. It was tough to put these characters in an order because it is difficult to rank their level of fail, but I took a shot at it.

Kicking off the list is George “Digger” Harkness or Captain Boomerang. Digger was born and raised ‘down under’ and is best known as being a member of Flash’s Rogues. He has the super power of being able to throw boomerangs…and that’s it. Some of the boomerangs explode, release gas, or are razor sharp, but he still throws them as hard and as fast as a normal human. Let me break it down for you. He fights a guy that can run almost the speed of light with ‘rangs that travel as fast as he can toss them. Now that “power” is great if you’re wanting to put on a show of sorts, but fighting the world’s fastest man doesn’t seem like a good idea.

Boomer was pretty much a failure for years. Unable to take down the Flash because his power, you know, sucks, by the time Identity Crisis rolled around he couldn’t get a job to save his life. Captain Boomerang did have a son who took up his mantle after he died during Identity Crisis. But, at least that kid has super-speed. And really, ‘Captain Boomerang’ is a terrible name. ‘Boomerang’ just sounds better and does Australia even have captains?

Next in the rankings is Cameron van Cleer or Drury Walker, whatever name he goes by. But, you’ve probably heard of him as Killer Moth. He’s an old Batman foe who wanted to set himself up as a sort of anti-Batman. Hire him and he’ll help you escape the police after committing a crime. He went even further trying to emulate Bats coming up with a moth signal, mothcave, and even his own mothmobile. Sadly, he didn’t try and copy Batman’s costume, instead I think he raided the Rainbow Raider’s dirty clothes hamper.

So aside from trying to challenge Batman and failing multiple times, Killer Moth also allied himself with other high profile villains like Catman (before he was cool) and Calendar Man (the guy with dates for shoulderpads). But, he couldn’t keep that together and those guys turned on him. Let’s rewind that, he was betrayed by Catman and Calendar Man, yea, this guy’s a winner. Then in an attempt to “become feared” he sells his soul to Neron. Being the trustworthy demon he is, Neron changes Walker into moth-like creature called Charaxes and last we saw of him, he was getting torn in half by Superboy Prime. There is now an unknown person running around with the Killer Moth handle as was seen in the Cry for Justice story where the Atom grew inside his skull until he got information he wanted. So it looks like this guy is continuing KM’s level of fail. 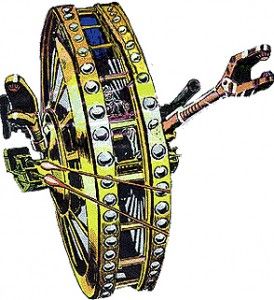 Jackson Weele AKA The Big Wheel is the third character on this list. You may never have heard of Mr. Weele, so here’s a quick rundown. Jackson was an embezzler, and fearing that he may be found out he hired the Rocket Racer (an almost equally lame character) to steal the evidence against him. Rocket Racer, like so many hired guns with morals, decides to blackmail Weele with the incriminating evidence and calls him “Big Weele” in the process. Jackson apparently never heard that before, so he turns to the Tinkerer (another lame villain) to help him get back at Rocket Racer for his remarks.The Tinkerer builds a large wheel with guns that can drive up buildings. Jackson, being the paragon of intelligence he is, hops into his “Big Wheel” to take out the Racer without reading the owner’s manual. During a battle with Spider-Man and Rocket Racer, he drives his contraption off a building and into the Hudson River, seemingly dying. But, Jackson’s failures don’t stop there.

Years later Weele returns in order to assist Spider-Man as a hero. He shows up during a fight between Spider-Man and Stilt-Man (see what I mean about Spider-Man’s villains?). Because he interferes with the fight Stilt-Man is able to escape. So not only did Jackson fail at being a villain, but he failed at being a hero as well.

Next up we have Zan from Wonder Twins fame. He and his sister Jayna form a crime fighting duo. Jayna’s power is the ability to take the shape of any animal she can name. Zan, on the other hand, can take the form of water. Now turning yourself into a block of ice would be great if someone was mixing drinks. And taking the form of a bucket of water is useful if the Wonder Twins ever take on the wicked witch. Turning into water is a great power, but having to take the form of water just seems pointless.

Not only does Zan have a less than stellar power, but he also has to make contact with his sister to activate it. So basically his useless power is rendered even more useless because he has to have his sister around to access it. Now writers have tried to make his powers better than they are. They’ve had him turn into an ice giant, a water monster, and an angry whirlpool (whatever that is), but it’s just a ploy to try and make him more useful than he is. So unless you need Zan to turn into an iceberg to sink the Titanic, you better skip over the Wonder Twins in your superhero yellow pages.

The character who has the dubious honor of coming in first is none other than Morris “Morrie” Bench, better known as Hydro-Man. So why is Morrie on this list? Well, for starters he has an awesome power, and has no idea how to use it. Water is powerful enough to flatten someone or cut a path the size of the Grand Canyon. But, the only thing Morrie apparently thinks he can do is drown Spider-Man by jumping onto him. I give Zan somewhat of a pass because he has to take some form of water, but Hydro-Man IS water. He could be a one man army as powerful as he is, especially if he was near a large body of water. So it puzzles me why he would ally himself with jokers like Electro and Sandman.

For a guy who is routinely defeated by power lines, you’d think Morrie would know to stay away from guys like Electro, and teaming with Sandman just screams they’re going to merge at some point, which is disturbing on many levels. All in all, Hydro-Man isn’t very smart. Not only because he has no idea how to use his powers, but because he chooses to partner with the 2 people who would be the worst partners for him. And that is why he deserves to reign atop this list.

So what do you think? Is there someone on list you don’t agree with, or someone you feel should be here instead? Let me know in the comments.

The StashMyComics Top 25 List: Heroes! (Part 5) It was a long time coming, but we've finally made it! Here we are, at the crème del la crème!…

The StashMyComics Top 25 List: Heroes! (Part 4) Writer's Note: I know I'm very late in getting this to you, our awesome reader base. Sometimes things in life…