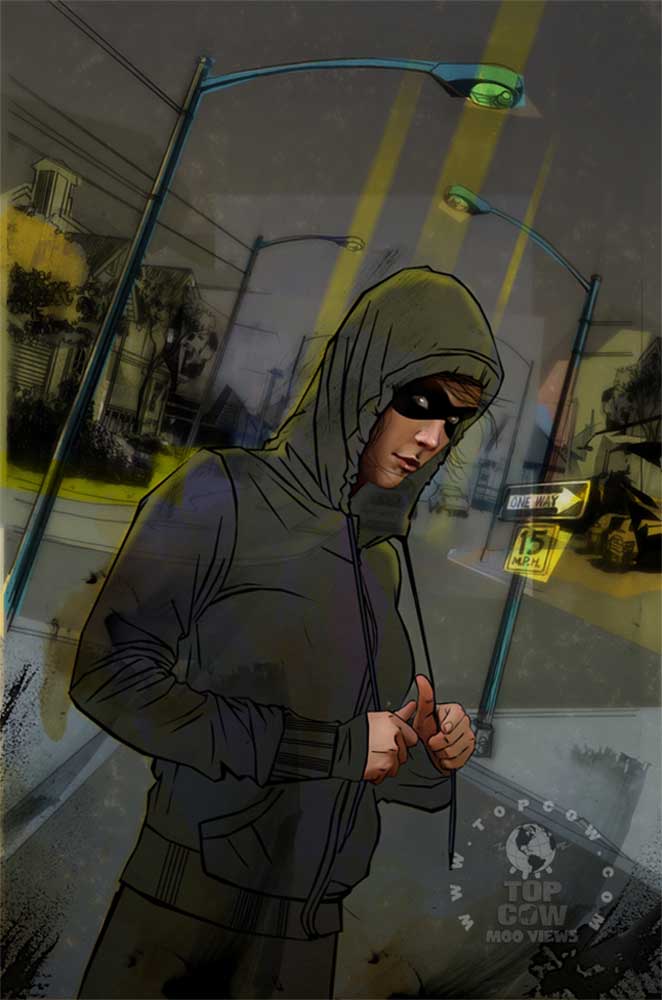 Some stories must be told in a roundabout way for that is how they unravel in life. Twilight Guardian #1 of 4 – winner of the 2008 Top Cow Pilot Season – tells the story of a reclusive woman who patrols her suburban neighborhood as a Real Life Superhero. It does so in a very streamlined, well researched and focused manner. Character is king in this story. Plot happens only to shed light on why the character does what she does and why she is how she is. A flashback reveals why Twilight Guardian – her “civilian name” is never revealed – never sees her father. Her ex-boyfriend, John disappears shortly before she reaches out to him for some closure. These key plot points are inherently intriguing but you’ll find that the effect those events have on the titular character is where the story’s heart resides.

And heart it does have. Lots of it! This is one of the kindest studies of a burdened psyche I have ever encountered in comics. The story is told almost exclusively through caption boxes taken from Twilight Guardian’s journal. The narration contained therein is not written so much as it is placed. Each word is deliberate, calculated for maximum effect. Read the book quickly and you will understand the story. Linger and the layers of meaning will unfold. This is how writer Troy Hickman injects ample feeling in his narrative.

Another trick Troy uses is the emotional bait and switch. He conceals scenes in such a way that you will feel one thing while reading it but the deeper meaning of the scene sneaks up on you. This technique is most powerful when Twilight Guardian reads a comic book each night before going on patrol. Troy actually pulls us into the comic book that is being read in-story. The artwork morphs to mimic the golden and silver age of comics. Hickman then fills these sequences with pun-tastic characters and mini-stories. The funny and exaggerated scenes are not solely for amusement. They exist to enlighten the reader on what Twilight Guardian feels and thinks. These pages make me laugh, entertain me. Then suddenly I realize I’m reading an analogy which exposes Twilight Guardian at her most vulnerable and real. It’s this sleight of hand that elevates Troy’s stories above average.

Sid Kotian handles art duties in this book. His line is generally light and somewhat frayed. It adds to the vulnerability of the character despite the occasional facial inconsistency. Kotian adds to the story mainly with his good use of angles. This fly-on-the-wall type of storytelling emphasizes the private tone of the story.  By extension, the character designs and the settings always feel very honest. Also, Kotian’s versatility comes in handy when mimicking different art styles during the “comic within a comic” pages. The colors play a key role as well. This book takes place largely at night and colorist Bill Farmer communicates the cold quiet of night fairly effectively with many in-between hues of blues, greens and purples. Overall I’d say Reza – who drew the 2008 one-shot from which this series spawned – was a better fit for the book. One visual aspect of the book I did prefer this time around is the hand-lettering of Troy Peteri. The slight shakiness of the hand-written words adds a layer of intimacy, as if we really are reading Twilight Guardian’s journal.

I’ve been a fan of Troy’s for a few years now and have read just about everything he has published. When I read his stories I feel inspired to be a better person, to be kinder and more understanding of others. Troy reminds us that people are profoundly fascinating, complex and beautifully fragile. With this latest release Troy follows through on his thematic thrust. Twilight Guardian is a hero like you and I. She fights foes we all fight such as fear, the past and loneliness. She is the superhero we all try to be.

If you would like to listen to an interview with writer Troy Hickman, click here to listen a free Comic Geek Speak podcast.