Two years ago a game was released that changed the face of superhero games, it not only changed storytelling but how combat was done. Never before had players felt like they were truly capable of beating down legions of street thugs as the Dark Knight himself. Arkham Asylum showed everyone just how great a superhero game could be and since then most games have come up short. Then, along came a game that improved most of what Arkham Asylum did … most of it. That game was Arkham City.

If you have never played the first game then I would more than recommend getting (or at least renting) the first game as it will not only show the basics of the combat, but will help with the storyline. While the storyline is second to none, as with the first, it takes a back seat to the combat. Batman flies around the screen punching and kicking thugs, or sneaking up on them and taking them down silently. Smashing in faces is great and all, but where would Batman be without his gadgets? The ones from the first game receive upgrades that allow a few puzzles and some interesting combat options. One of the things that really made combat interesting was the inclusion of the smoke pellet, it confuses guys and makes for easy takedowns. 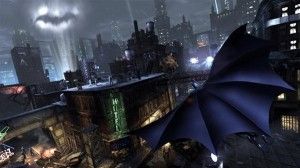 Taking a stroll around Arkham City is completely astounding, and by using the improved grapple gun Batman can fly from one end to the other in a matter of minutes… I would not recommend that though unless your chasing down Victor Zsasz. The city is just like you would imagine what a large section of Gotham would look like after being given to almost all of Batman’s Rogues Gallery. Everything is designed beautifully and the city looks similar while changing areas to share the current ruler of that space.

Animation and movement is just a well done, from the main villains to the common minion each show a personality and feel different. The voice work helps as you can stop on a building and listen in on conversations and gain hints or information that will help with objectives. Another slight change is the Detective mode, in the first one you almost had to rely on it to see where guys were, in this one it provides further information and tactical data. I used it much less than the first game as it tones down the surrounding area making it harder to navigate, which was much appreciated. 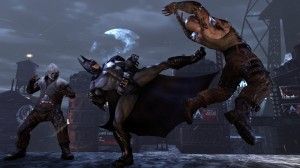 The tale that you follow in this game is quite interesting, with a usual amount of twists and turns it does have a decent payoff. Following what happens after a large section of Gotham is walled off and used as a large prison is a little head scratching it is well written. Doctor Hugo Strange makes a great villain and the other appearances work quite well and fit in easily. The one issue I have is that while the inclusion of side missions is great, most of the time you get flooded with them and easily lose track of whether you need to destroy tanks of venom with Bane or figuring out Riddler’s clues to save innocent citizens. It would be nice to have the option to hold off and come back later instead of this constant barrage.

Missing out on this game would be a crime worthy of anything that the Joker has accomplished, well maybe not that bad, but this is one game that should not be skipped. Just about everything that Arkham City offers is incredible and worth at least two to three replays. Not to mention there is some decent DLC that helps to extend the life after the main story is over.

Gameplay: The fighting was great in Arkham Asylum, it’s even better in Arkham City. You feel so much like the Dark Knight that it’s uncanny. Everything flows and puts most other action games to shame. 10 out of 10.

Graphics: I’ve found some open-world games to have an issue with draw distance and field-of-view, there’s none of that here, this game makes it easy to see where you’re going and environment you run around in is just incredible. 9 out of 10.

Story: The main story is great, I loved almost all of it except for a few predictable moments. What brings the score down is not that there are a ton of side missions, it’s the amount that are tossed at you to the point where I had 10 side missions all active at the same time and started having a few of them interfere with each other causing me to fail two of them. 8 out of 10.