While most people reading this will only be familiar with the character of Ness from the Smash Brothers series, which is a shame, some people remember him from one of the best games ever created. The Earthbound series is known as Mother in Japan, it had three games overseas but here in the states we only ever had the pleasure of getting one.

Allow me to show my age, if you will, and let me tell you of the days of yore… when role-playing games were not just slap the attack button until bad guy falls down, when you have time to strategize and learn an enemies weakness and then exploit that. These were the times of turn-based gameplay, some enjoyed it, some despised it. This game is one of those games that take full and complete advantage of it while offering humorous messages and odd situations. Any game where you can use a teddy bear to take damage for you gets a free point in my book. In the actual combat though you can mainly choose from two different methods, either some sort 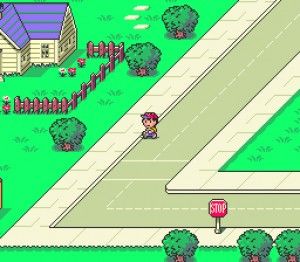 of physical attack with your usual “around the house” weapon (baseball bat, frying pan, etc.) or what could be considered magic or “PSI” attacks. The PSI attacks are your basic elemental and psychic attacks that are shown on screen as mainly a flash of color and a status message.

Given that this game came from the era of the SNES and were composed of sprite based graphics and music called chiptunes (or MIDI for those in the know.) Don’t let that turn you away though, it gives the game a certain type of childhood charm. The characters are quite recognizable and everything has a pop-up book look to it, further enhancing the storybook look.

The story on the other hand seems to be run-of-the-mill RPG standard thing crashes down and cause fear and panic leading to monsters and other nasties. As far as story progression goes it may be a little dry for the first two-three hours but it quickly picks up in terms of interest and humor. This is one of those games that carries the charm and tries to make you love it and ends with one of the most debated boss battles (in terms of meaning and significance) in gaming history. The music also helps pull it all together in terms of being catchy and enjoyable. 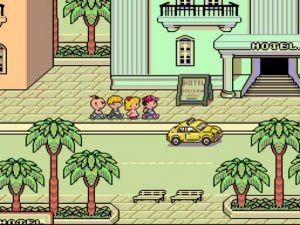 Gameplay: While enjoyable it does take quite a bit of grinding and randomly finding weapons. If you want to survive most battles you have to wander around and fight, and fight… and fight. The battles do flow quite well and it is fun to beat up monsters with baseball bats and yo-yos. If you like traditional turn-based combat, like I do, then give this a shot, 7 out of 10.

Graphics: Sprites, and plenty of them. This should be expected on the Super Nintendo, but this game does quite a good job giving an almost surreal vibe to the battles, especially the final boss fight. It feels quite cartoonish and gives it quite a retro feel, 8 out of 10.

Story: Goes from an average day to strange, to incredibly strange, to this is just insane… and you should love just about every minute. It makes no sense, but at the same time it makes complete sense. The tale of Ness and his friends is one that should not be missed, 9 out of 10.

Rating: K-A, Kids to Adults (pretty much E for Everyone)