“We bought it to burn it.  Some (bootlegs) appeared at comic book conventions just to drive us nuts.  The deal was we buy it, we burn the masters so we can do it right.” – Avi Arad, interviewed in the Seattle Times, June 2004

This has to be one of the most sought after comic movies ever.  I mean, who can honestly say they have a copy?  Well I do, but let’s not count that.  If you haven’t seen this movie, thank the comic gods for Youtube. You can search for it, find it, and watch what Marvel wishes had never made it out.

The plot of the movie is quite simple.  We follow the origins of the Fantastic Four and Doctor Doom, from their time in college all the way to years later after Doom has had his accident and is taken back to Latveria, when Reed Richards collects Ben Grimm and Susan and Johnny Storm for his test flight into space.  Cosmic rays ensue and we have the Fantastic Four!

Let’s go into a little bit of the history of this movie.  In 1992, Marvel had leased the rights for the film to a company called Constantin Films.  It was approaching the deadline and they had a choice:  Make the movie or let the rights revert back to Marvel. The producers sought the help of a really great low budget film director.  Roger Corman. (If you don’t know, he directed Grand Theft Auto, the original Little Shop of Horrors, and Death Race, just to name a few) The producers of the movie then led Roger Corman, all the actors and crew of the movie to believe that the movie they were about to make was actually going to be released into theaters. They all worked for next to no wages, and even did mall tours and interviews to promote the movie.  Once the movie was made, it was shelved and everyone was told it would not be released because of the budget. 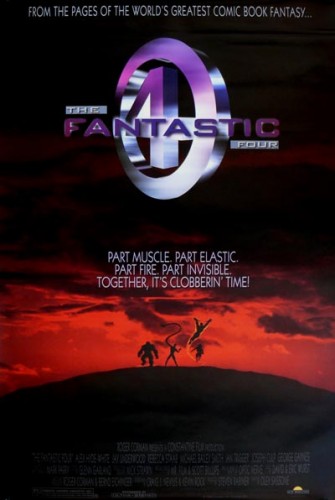 They really did put everything they had into this.  You can tell when you watch it.  I would assume that they had two, maybe three takes if they were lucky.  The acting is sub par, but it has that raw feel to it.  Yeah, it’s cheesy but not bad enough that you have to cringe and look away. My brother would disagree though.  He is right in the fact that, compared to other movies, the acting is horrible.  But knowing what they had to work with, it’s better than most other low budget films. OK, again, it’s bad.  When Doctor Doom flexes in the sewers you know the acting is bad.

The costume design is actually pretty good.  The coutfit for the Thing looks, well, like the Thing.  He’s big, orange, and rocky.  Doctor Doom, on the other hand, looks very very close to what he does in the comics.  You can tell that time and effort were put into making not only the mask, but the suit as well.  As for the Fantastic Four’s outfits, a little more time could have been spent on those.

With a movie like this, you definitely get what you pay for.  It was made on just over a million bucks, so you can’t expect much more than that.  The special effects are pretty bad, what with being able to see the wires used to move Mr. Fantastic’s hands, Doctor Doom’s flexing, and the over exaggeration of Johnny Storm as he figures out how to use his powers.  With a movie like this though, you can also see the heart that was put into it.  You can see the faith the actors had in the film even though they were lied to.  Yes, it is terribly tacky.  Yes, it’s horrible on nearly every aspect.  Yes, it most definitley should have been tucked away for nobody to see, but when you bust this copy out of your movie collection and show your friends, you’ll get the reaction this movie should have gotten. You’ll get surprise, shock, awe, and maybe even a tear or two.  OK, that was a bit too much, but the fact remains:  If you’ve never seen this movie, you must.  It’s bad enough to say “Wow!  That stunk worse than my dad after Taco night!”  It’s good enough, however, to watch again and again.

Fan Film Friday – The Silver Surfer / Elecktra: The… Strap in and hold tight, this week for Fan Film Friday we're going all out Marvel!  So far, we've seen…

Fan Film Friday – The Greatest Fan Film of All Time Once again we return to Fan Film Friday!  Ladies and Gentlemen, the film you are about to watch totally took…

Fan Film Friday: The Question Happy New Year everyone and welcome back to Fan Film Friday!  If you're new to FFF, let me give you…