If you’re browsing the site and reading this article, then I’m sure you like comic books. But do you like webcomics? While some people don’t really think of them in the same category as print comics, quite a few comic creators got their start in webcomics, like Jim Zubkavich of Skullkickers for instance.

The digital format makes it easy to distribute and interact with readers, and there is a lot of variety in what people call a “webcomic.” Because of this, anyone with a computer and some art skills, and even some without art skills, can make a webcomic if they really want to. This leads to there being a HUGE amount of webcomics out there, good and bad, which makes it difficult to find webcomics other than the ones that everyone on the internet knows about. As a self-proclaimed connoisseur of webcomics, I’ll give you a few comics to start with and try to stick to ones that may not be quite as well known as say XKCD and Cyanide and Happiness.

I’ll break them down into the following categories: Full-Page comics, much like print comics, just digital; 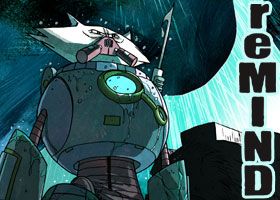 Strips, much like newspaper comics; and Other, comics that don’t really fit into the other two categories, (like photo comics for example). The links will be to the first page of each comic so you can start fresh. I’ll include Twitter links where applicable on the creators’ names. Some of the webcomics may have some vulgarity or crude humor, but I promise they’re worth it. Enjoy!

Full-page Comics: First up is reMIND, by Jason Brubaker. reMIND is a story involving mind switches, lizard people, underwater cities, talking cats, and talking cats in power armor! While it all sounds a bit crazy, it’s perfectly enjoyable. Brubaker, who works at DreamWorks when he’s not making reMIND, began posting his comic online and has since published print versions of the now complete first volume. Currenly he updates with a page from Volume Two every Monday.

Next is Pictures of You.  It’s a bit more dramatic and character driven than the other comics I’ll list, but it’s well worth a read in my opinion. The creator, Gibson Twist, says it’s an homage to his drinking buddies and all the dumb things they’ve done. It follows Peter and his group of friends through their various misadventures. At just shy of 1000 pages, you can definitely kill a weekend reading through the archive. 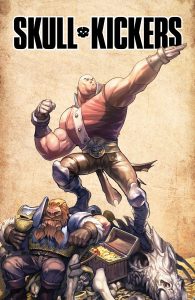 As a bonus, Skullkickers from Image Comics is being serialized online one page at a time every single weekday. It’s done the reverse of most webcomics, going from print to online, but it makes the comic super accessible to new readers. If you’ve heard about the series, but never picked it up, read through the archive and check it out. I know that the first arc is definitely up, and the second arc is being worked on.

Strips: A strikingly simple, but still fantastic comic is Everyday Blues, a comic which has the slogan of “Because it’s better being bitter.” Creator Felix Goldberg chronicles the blunders of a hopeless romantic as he attempts to deal with a world that isn’t quite as fun or interesting as he would like, as told with stick people.

Let’s Be Friends Again is a comic by Curt Franklin and Chris Haley that pokes a little bit of fun at the comic industry and super heroes, among other things. A webcomic about making comics? Meta! While the comic is great and you can tell the creators are good friends, the exchanges between the two and about one another in the comment section on each post is usually just as good as the comic itself. 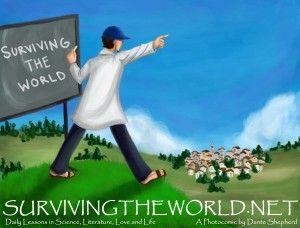 other” this time, but it’s probably my favorite webcomic on the interwebz. Surviving the World is the creation of Dante Shepherd, who was a research scientist and is now a college professor when he’s not taking pictures of a chalkboard and posting them on the internet. The comic is set up like a classroom and every single day Professor Dante brings you, the student, a new life lesson on his chalkboard. Just as serious as it is silly, Surviving the World makes for a great quick distraction once a day. At nearly 1600 comics at this point, browsing through the archive can take some time, but is well worth the effort.

So, there you have it. A half-dozen handpicked webcomics from all over the internet. Check them out, let me know if you liked them, if you didn’t, or if you couldn’t care less. If you need some more webcomic suggestions, keep checking back as I’ll handpick even more for you guys to enjoy.

Crowd Funding Flash: Wolf and Man Wrapping up its webcomic run, Wolf and Man now turns to Kickstarter so creator Jordan Kroeger can print a collected volume of the…

Geek on a Budget – October 2011 Why Try Digital Comics? Since most of us have a limited amount of space we can devote to traditional print…

Editorial: Digital vs. Physical – What’s it about? There has been a lot discussion in the comic world over digital comics. Many comic readers are split when it…