Oct 10, 2013 by Leo Johnson    Comments Off on Where’d You Get That?! — Bad Karma HC    Posted In: Crowd Funding Flash, Kickstarter Spotlight, Reviews

Bad Karma is more than just a book, it’s also the creative collective comprised of Alex Grecian, Jeremy Haun, B. Clay Moore, and Seth Peck. Bad Karma, the book, was successfully funded on Kickstarter back in January that resulted in a whopping 200+ page tome that includes comic short stories, prose short stories, and many pinups and art pieces, all set in a shared universe. With everything from time travel to zombies to chaotic agents to Lovecraftian horror and seedy detectives, Bad Karma mixed and matched varying concepts and creators to make something that was truly astounding.

Though there are a multitude of stories with a wide-ranging set of genres and styles, Bad Karma is chiefly comprised of five tales told in one or more segments: Middleton, the story of a boy genius who must solve crimes past, present, and future; Chaos Agent, a story of the battle between Chaos and Order and how the delicate balance keeps life as we know it running; Old Dog, in which an ex-police officer deals with personal demons as well as things a bit more supernatural; Hellbent, a story of a seedy, corrupt detective in Victorian England who isn’t the best person around, but he may be the only hope; and The Ninth Life of Solomon Gunn, in which Solomon Gunn finds himself slipping through time in search of answers to questions he barely understands at all. 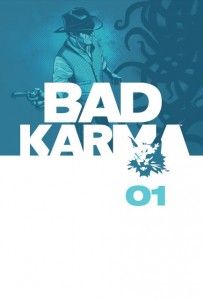 With such a wide range of stories, it’s hard to talk about all of them, but I would like to talk about two of my favorites, one a short prose story and the other an installment in the Hellbent stories. The short prose story Hungry Steve, written by Alex Grecian with a couple of illustrations from Nathan Fox. After finding a zombie, though never called that, trapped in the woods, three boys begin to care for him as they would a pet. After a few days of feeding and watching the creature they affectionately named Steve, something terrible happens, as it often does. After the incident with Steve, a mysterious group creates a cover story for what happens, leaving only one boy who really knows what happened out in the woods.

Hungry Steve is well-crafted by Grecian. It starts off as a simple, innocent adventure of three young friends as they go play in the woods. It ends with something much more terrible. The way it seems unrelated to anything else in Bad Karma, but still ties into the overall world is great. It doesn’t feel bogged down with trying to fit into some sort of canon or continuity, and the connection to the rest of the stories is done in a completely natural way. Grecian paints a detailed picture of Steve, goofy grin and all, and his young caretakers and the grisly end that comes to the short-lived adventure. The illustrations from Nathan Fox help to give a good visual representation of Steve trapped in his tree root prison, only enhancing the overall impact of the short story.

The first installment of Hellbent, setting up who the character is and his future dealings with the supernatural in Victorian London is my favorite of the bunch. Seth Peck has made Bentley a character who is morally corrupt, a bully, ruthless, and generally a terrible, terrible person. He’s the exact opposite of who you’d want to be a police officer, but it turns out that he just might be the right person to take care of supernatural threats. His ruthlessness and vicious spirit find a good target when he’s exposed to something entirely otherworldly and almost killed twice. Though you hate him, Bentley is the only hero there is, and Peck makes him just enough of one to carry the story. A hard-edged dirty cop set in Victorian London is already a great idea, the Lovecraftian monsters only make it better. The art from Tigh Walker on this installment of Hellbent gives Bentley and London a dark, bold look. The heavy line style and the shading make this feel like a grim sort of a detective story, in the best possible way.

These are just two of over a dozen short comic stories and prose shorts, not to mention all the pinups. Basically, Bad Karma is packed to the brim with fantastic comics, fantastic prose, and fantastic art from a group of writers and artists with so much talent that it can barely be contained all in one book. For those interested, be sure to check out the Bad Karma site and the Bad Karma store page, where shirts, books, and prints can be found. The Bad Karma guys will also be at New York Comic Con, so be sure to track them down there.