Back in December I directed you to some very unique comic books you’d be hard pressed to find at any store. Why are they so difficult to find? For starters, they were originally only available through crowd funding sites such as Kickstarter, Indiegogo, or Pozible. Now these creators are letting the general audience in on their success! That’s where I come in.

It can be hard to track some of these books down, even for someone who makes it their priority to know these things. My intention is to eliminate the detective work for you, and give you a direct line to dial in to these one of a kind comic books! Below is a list (in no particular order) of projects that are definitely worth you dollar. 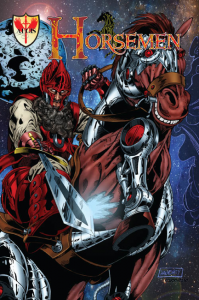 The Ascendant by Mark C. Frankel

One of two books crowd funded by Mark C. Frankel in conjunction with one another through an Indiegogo project, The Ascendant follows an escaped Duke of hell who starts to feel remorseful for all the horrible deeds he has done over the course of a millennium. He takes human form and hunts other evil creatures to make Earth a better place to atone for his previous misdeeds! You can find issue #1 for sale at IndyPlanet!

Frankel joins up with Joshua L. A. Jones to tell a tale of intergalactic guardians defending the multiverse! Fate and Destiny seek to destroy freewill, and only the Horsemen can stand up to their cosmic conquest… we hope! Can their latest recruit help them win, or will his inexperience contribute to their defeat? You better believe this book is going to be epic! You can also find issue #1 of Horsemen at IndyPlanet. 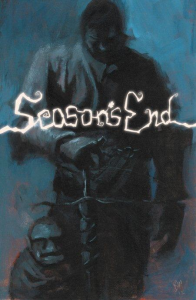 This successful graphic novel Kickstarter is a 120 page hard cover Gothic fantasy tale packed full of gorgeous and terrifying painted art from Blake Wheeler and written in prose by Jason Pell. Season’s End involves the last priest who can perform ancient miracles, to challenge dark magic that has taken a foothold in his world. He is joined by a soldier, a brute and his captive, a dark wizard, and a bard, all seeking answers in the growing darkness! This is not your typical book. You will not find anything like this at any store. The ONLY way you can get it is by visiting the Season’s End Etsy shop here. In addition to copies of the book, you can also find original art and a sweet looking T-shirt as well!

The Werewolf of NYC by Edwin Vazquez

The story for this one is pretty straightforward. A werewolf violently roams the streets of Hell’s Kitchen, New York City in 1984. Any fan of slasher/horror can dig that premise, right? What is absolutely not to be missed is the uniquely styled artwork of Vazquez. You can find issue #1 available in digital or print in the store on the Werewolf of NYC website with stickers and another rad T- 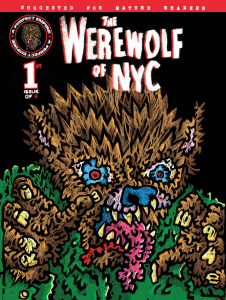 shirt to add to you’re wardrobe! Careful, this one’s suggested for mature readers!

Well known for their work on Jonah Hex, Jimmy Palmiotti and Justin Gray teamed up to create Retrovirus, a science fiction/horror mash-up! Following the success of the Kickstarter, Image Comics picked up this 58 page hard cover graphic novel for distribution. The story follows a young scientist who finds the remote research facility she works for is hiding dark secrets, while she races against time to stop a global pandemic! If you missed it in stores, don’t fret, you can still get it in digital at Comixology or physical copies through Amazon! Want more crowd funded Palmiotti work? You can get his horror graphic novel, Queen Crab, in digital or hardcover with art by Artiz Eiguren.

Very Near Mint by Justin Peterson

Volumes One and Two of this wildly successful series have both been successfully crowd funded, and Volume Three has an active Kickstarter ending February 23, 2013! So what’s it about and how do you get it? Very Near Mint is an ongoing 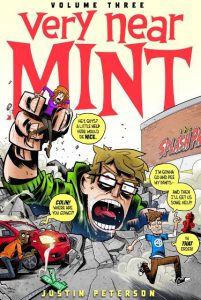 series about two guys who own a comic shop, and their war against the rival comic shop located right across the street! If you want to get in on all three volumes of this series, you can back the Kickstarter at $12 for digital or $50 for physical copies of all three volumes! There are some pretty sweet variants (example on the right) attached to this project that parody some famous comic covers! D0n’t want to go “all in” just yet? Visit the Very Near Mint store and choose what and how you want it!

Up next is a series that started as a unique conjuncture of students from the Academy of Art University as a webcomic, with art direction by Jeremy Saliba of Dynamite’s Wheel of Time and a script by Brian Schirmer. It’s set in a reality where the world leaders of 19th century Europe include Dracula and Frankenstein’s Monster! Volume One was successfully Kickstarted and clocks in at 96 pages, available for purchase at tfaw.com. Ultrasylvania Volume Two is also available (check out the rad cover), but only through an active Kickstarter campaign loaded with incentives for you to choose from. Pay the project page a visit and show your support before it ends on February 15, 2013!

I Draw Comics Sketchbook by Matt Marrocco and Ryan Stegman

Want to learn how to draw super-people? The I Draw Comics Sketchbook is a revolutionary tool that incorporates instruction, tips, and space to practice all in one place. The WILDLY popular Kickstarter (exceeded it’s goal by $235,870), is proof of the demand for a better tool. I can tell you first hand (I got my copy in January) that the sketchbook should please beginners and anyone looking to freshen up or hone their skill. The book comes beautifully bound in a moleskin cover, and includes an attached bookmark ribbon. If you’d like to learn more about the sketchbook, visit the Kickstarter project page. Ready to buy yourself a copy? Follow this link to place an order. The I Draw Comics Sketchbook should be available to order by February 12, 2013, so keep checking back if the store hasn’t opened yet!

If you’re looking for more ideas on unique books to add to your collection, then take a gander at the list I put together in the December 2012 edition of Where’d You Get That!? Each series on that and the list above are books ready for purchase. All you have to do is wait for them to ship or download direct to you! As always, if you know of a crowd funded project that is complete and ready to buy, give it a shout with a link in the comments below.

I write Crowd Funding Flash, which comes out every Wednesday right here at StashMyComics.com! Keep up with the latest on spotlighted projects by following me on Twitter @ChipReece!