From Inverse Press, Kevin LaPorte, and Shawn Harbin comes Roadkill Du Jour. It’s the story of a man as he searches for his lost love and attempts to rescue her from a terrible fate. Along the way he fights evil and gains an ally, all while rocking a thick Southern accent and a sweet motorcycle.

The issue begins with a meditation on emptiness and what it does to a man, before we finally see our hero, Du Jour. It seems Du Jour has the strange ability to take on the form of animals that he eats. As the title of the book suggests, he eats nothing but roadkill because a curse has been put upon him. After taking the on the form of an armadillo, he must face off with some alligator men as he chases a glowing light that is the spirit of his dead wife. It’s after this encounter that Du Jour enlists a young boy, nicknamed Papoose, to help him follow that spirit and defeat the evil Mama Houdoo. 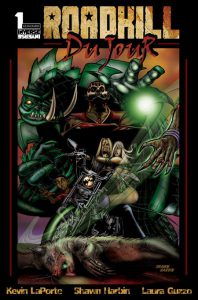 This book exudes Southerness. Kevin LaPorte is from Mobile, AL (I found after a little internet stalking), so it only makes sense that he feels at home writing characters who are deeply entrenched in some very Southern things. As someone who has lived 95% of his life in Alabama, Mississippi, or Louisiana, and incidentally only lives an hour or so from Kevin, I immediately recognized these things. Roadkill litters the highways of the nation, but it seems to be especially common in the South. And eating the roadkill is something that I’ve only heard of in the South. LaPorte took this idea, added a bit of the supernatural, and built a story around it that incorporates many pieces of the South. The swamps of the alligator people, Mama Houdoo and her “Hootenanny”, and the thick Southern accents that all the characters have add a lot of richness to the story. At the same time, the accents and dialects might throw some people off. Personally, I’m used to people talking like that, so it’s normal to me, but others may find it hard to follow some of the dialogue. Overall, LaPorte does a great job of not only writing an interesting story, but also fully entrenching it in the places that it’s set in. It mixes pieces of Southern culture with some of it’s grand tradition of folklore and ghosts, and makes a story that’s a bit more than the reader expects.

Shawn Harbin makes the story visually rich. His attention to detail, whether it’s the many, many scales on an armadillo or the sinister teeth of an alligator, makes the characters pop off the page. The level of work put into the art sets it apart from many indie comics, as it’s obviously something that was done very well. The art accurately captures who the characters seem to be and the backgrounds they are set against. The colors by Laura Guzzo really help bring it all together. The colors perfectly set the mood as the story transitions from day to night and get progressively darker in tone.

All in all, it’s a solid read. Though the dialect used by the characters might be hard for some, it only helps to further root the story and characters in the South. The art does a great job of conveying everything, while not looking amateurish. The various aspects of the story that pertain to Southern culture only help to make it more enjoyable for anyone who has grown up with it.

If you’re interested in getting a copy of Roadkill Du Jour, you’ll need to contact the book’s writer directly by email at kevin@inversepress.com, because RDJ #1 is just hot off a successful crowd funding campaign! Otherwise, keep your eye on the Inverse Press website for additional news on future releases. Issue two will be launched via Kickstarter the last week of May, so be sure to check out the incentives and additional opportunities to get your hands on this series!