We have all seen it time and time again. Superhero stops villain after they commit a crime, villain is tried and sentenced to prison, villain escapes prison and starts the cycle all over again. So why don’t superheroes take a more active role in designing and building the prisons to house their enemies? Using all of the advanced technology heroes have at their disposal, it should be easy for them to draw up some blueprints of a prison and implement it.

It doesn’t make sense to go through all the work and danger of apprehending a criminal just to let them break out of jail. Between technology they invent themselves, alien technology they have access, and even future tech they can possibly procure, superheroes should be able to build advanced prisons to keep villains off the street. 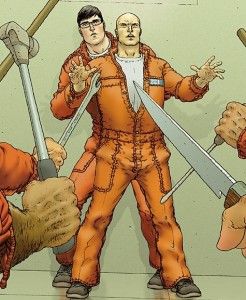 There have been a couple examples of heroes building prisons. In DC’s Kingdom Come, Superman and his group built the Gulag to house prisoners, even installing Mr. Miracle as warden. Using their advanced technology they designed a prison to house any enemies who would not convert to their side. However, the inmates did riot and escape, but it should be easy to invent some kind of power dampening collar of sorts. Also, it was revealed during Marvel’s Civil War that Reed Richards, Tony Stark, and Hank Pym had designed and built a jail in the Negative Zone. Codenamed Project 42, it was constructed to hold superpowered criminals and heroes that would not register their identities. And the only reason it was broken into was because Hank Pym had been replaced and allowed Captain America and troops access.

In Identity Crisis, the technology described to secure the Dibny house was astounding. Thanagarian, Martian, Kryptonian, and even a mother box was thrown in for good measure. All of this technology was designed to keep intruders out and record if a break-in had been committed. That technology combined with all the goodies the JLA satellites and moonbases have had could easily be engineered to build a prison. On the Marvel side, the home of the Fantastic Four, Four Freedoms Plaza, is a technological marvel. Materials used in the construct of the building are super strong, and in the event of an attack, security devices can seal off the building. Those safeguards could easily be retrofitted to serve as a high tech jail.

Sure, when villains are incarcerated they’re stripped of their gear, but a lot of criminals made their equipment. It wouldn’t be difficult for someone with an advanced intellect to build some kind of rudimentary device to facilitate their escape. Heroes could ensure that no one could use any tools or equipment around to break out.

So who would your top 3 designers for a super criminal prison? I’d go with Batman, Mister Fantastic, and Mister Miracle. The greatest escape artist in the universe could ensure no one escapes. Batman could invent some scary stuff, and Mister Fantastic is the smartest man in his universe. Who would you choose and why? Let me know in the comments.

Should Superheroes Have Day Jobs? It's an interesting debate, should superheroes hold down a job where their presence puts coworkers at risk because of their…

Top 5 Jobs for Superheroes Awhile ago I wrote about whether or not superheroes should have day jobs. If you are interested, you can check…

Review: HunterPrey HunterPrey is the first comic StashMyComics has reviewed from Broken Icon Comics and I must say, it did not disappoint.…