I’m not complaining. I often inwardly express gratitude that I live in the day and age of the superhero movie. I don’t care if some superhero movies are cruddy. I’m just happy that in my lifetime I got to see a flying, lava-spitting pixie engage a glide-suited, sonic blasting teenager in an aerial fight. But every now and then I sigh and look longingly out the window, imagining what it would be like if I owned a thought-to-movie transformation machine. Oh the movies I’d make!

The Huntress: A former Italian mob princess whose family was murdered by a rival crime family is brought up from childhood by her cousin. Her cousin being part of a lineage of assassins, she is trained in the tradition. She vows to avenge her family but in the process takes on a holy quest to fight organized crime the world over.

Directed by Paul Greengrass. He has the chops to direct a slick action flick with streamlined plotting. This is what I want from a Huntress movie. No domino mask, just a strong female lead in utilitarian outfit who won’t rest until the mob is dead. 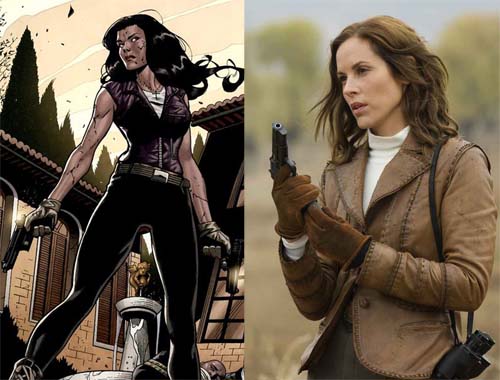 Lead role, Maria Bello. If you’ve seen The Cooler, you know this sexy woman has acting chops. You may think she’s a bit too old for such a physical role but I don’t believe there’s an “expiration” date for actresses being in physical roles. It looks like she did fine in the Mummy and she has expressed the desire to take on more action roles. Kate Beckinsale it 38 and nobody seems to complain about her ability to do action. And after all I’m kind of tired of young actors being cast in roles where the character has an established career. It takes a long time to be successful in one’s field.

Main villain Liam Neeson. Watch Taken. You’ll know this guy can play a highly trained stoic hitman like no other actor can. And the ages match between Liam and Maria.

The plot: After witnessing the murder of her family while hidden in a closet, the young Helena Bertinelli is raised by her cousin and trained in the martial arts and various hitman techniques of combat. Helena grows up wanting to fight crime and becomes a lawyer. In a particularly tough case, she is unable to have a notorious crime lord  – who was a rival family to hers before they died – convicted due to judges and political officials being corrupt. Upon learning that this man ordered the hit on her family, she decides to pay the crime boss a visit to kill him but is easily thwarted by his bodyguard known only as Omerta. it is revealed to her that Omerta has been the Mafia’s main hitman for decades ever since he was a young boy as he is innately skilled at the task. Omerta killed Helena’s family. Frustrated, Helena visits her cousin wanting to brush up on her training so as to hunt down and exact revenge on Omerta.

Another superhero movie I’d like to see made is Animal Man: After a bizarre encounter with an alien spacecraft, Buddy Baker develops the ability to tap into the “morphogenetic field”. This allows him to borrow animal abilities such as flight, strength, breathing underwater and other more quirky powers.

Directed by Spike Jonze: For those of you familiar with Animal Man, you know that he is not a traditional type of supehero. And if you know Jonze’s work you are aware he’s an unusual director. I think these two are a perfect match. 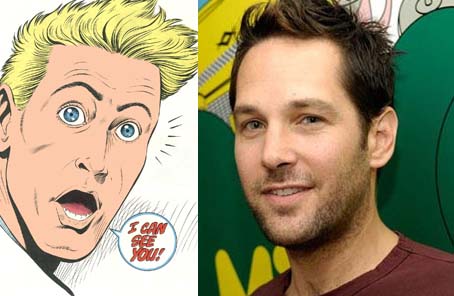 Lead role, Paul Rudd. If anyone can play average guy in weird scenarios, it’s him. He’s not blonde but I really don’t think Buddy’s hair plays an important factor in his character. This is not Captain America we’re talking about. He’s Animal Man, a C-Lister at best.

Main villain, none: This won’t be your typical movie, see below.

The plot (If you don’t know what happens in Morrison’s Animal Man run, here be spoilers): No origin story. Buddy Baker is an out of work actor and superhero. He makes the occasional embarassing TV appearance to make a few bucks so his wife and kids won’t think he’s a complete failure. He goes out on occasional patrols and snuffs out a crime here and there but nothing spectacular. But while tracking a bank robber on his way to Vegas, Buddy’s powers get all wonky and he becomes stranded in the desert. He has bizzare hallucinations involving mostly movie theatres. Buddy finally is rescued but is left with the strange sensation that he is being watched all the time. The rest of the movie is Buddy trying to figure out what is happening while encountering stranger and stranger things eventually becoming aware that he is a character in a movie. Part Truman Show, part Fear and Loathing, this movie is Jonze’s answer to the superhero genre. If anyone can do self-referential meta, it’s Spike. Have you watched Adaptation? Add superpowers and you’ve pretty much got Animal Man.

I think there is hope for these types of movies to be made. The superhero genre has been around long enough that it has shown itself to be diverse and elastic. We’ve had Watchmen, Super and Kick Ass. Those aren’t what you would usually think as your typical Superhero flick. As we know as comic book fans, there’s room for more of these off the beaten path movies within the superhero genre and I certainly have my 12$ ready to buy a ticket to see them.

Which superhero story do you think would make a great movie?